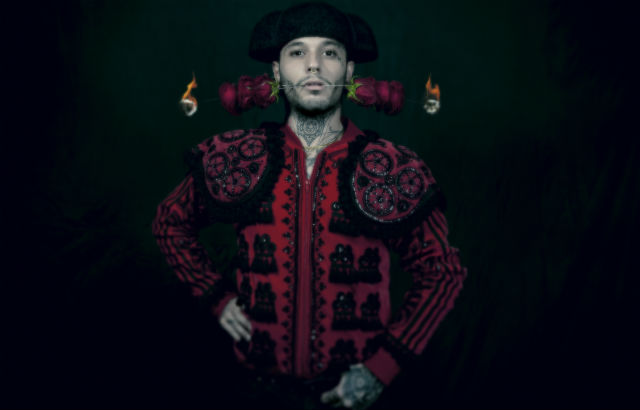 Known for the provocative nature of his work, Jon John was an innovative artist who used his body in situations of ritual suffering, duress, and difficulty in performance.

Born in 1983 in the French Basque, he was also renowned for his piercing and tattoo studio AKA (Berlin and London), his development of techniques for piercing, scarification, implants, and as a designer of body piercing jewellery.

Jon John’s work explored controversial themes including pleasure, pain and ritual as well as cancer and death. His performances drew on extensive field research in the Middle East, North Africa, and India, where he investigated folk usages of ritual self-injury as forms of secular as well as religious practice.

In his performances, Jon John also incorporated references to high fashion, pop music, so-called ‘modern primitivism’ and industrial culture, magic, sadomasochism, and sex. Including uniquely sentimental uses of bloodletting, hook suspensions, dancing on thorns, and DIY surgery, Jon John’s own tattooed, scarred and ‘hacked’ body was central to his work as an artist.

Jon John died of cancer at the age of 33 in 2017. His last performance, which is documented in the archive, represents a goodbye gesture of sorts and was performed for a small invited audience several weeks before his death. Love On Me: The Finest Hour was streamed live on Facebook, and suggested an attempt to come to terms with death through intimate performed rituals.

Art as a teaching tool

Acquired by Queen Mary’s Dr Dominic Johnson from the Department of Drama, Jon John’s collection is a unique and valuable addition to the teaching of Live Art at the university. It is anticipated that artefacts from the new acquisition will be used in teaching on Queen Mary’s brand new MA in Live Art, the first of its kind in the UK, which launched in September 2018.

Paul King, co-founder of the Body Piercing Archive (San Francisco), who donated the archive to Queen Mary said: “Although cut down by cancer in the prime of his creativity, the power of Jon John's performances left a deep and indelible impact on his audiences and co-creators.

“Jon John and I wholeheartedly agreed his material archive would live on most fully at Queen Mary University of London, under the care of Dr Dominic Johnson, as a learning tool for students and a rich source of study for researchers.”

Dr Johnson said: “It is a great privilege for Queen Mary to acquire Jon John’s archive; we’re committed to acquiring archives that are vulnerable or at risk, and especially those of artists that other institutions have found it difficult to celebrate.

“The collection is a challenging one, as alongside sketches and photographs it contains many unique art objects, materials created with bodily fluids and human tissue, as well as specialised equipment. It is a testament to the way performance art often troubles institutional methods of valuing, documenting or collecting art: we look forward to working with these challenges with scholars, curators, students and guests.”