Blog: A Q&A with Professor Sir Harry Bhadeshia: “I discovered that steel is complicated.”
30 January 2023

Researchers show a link between the time of activation of dozens of genes in the embryo and how the life cycles of animals evolved. 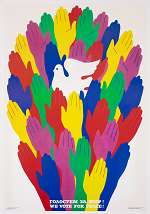 Dr Andy Willimott’s new book, ‘Openness and Idealism: Soviet Posters 1985-1991’, looks back at the colourful and radical posters of Glasnost.

The volatile price of raw materials and energy supply are predicted to be primary causes of disputes in the energy sector globally over the next five years, according to a major new study from Queen Mary University of London's School of Law.

Some 3,000 students attended January graduations at Queen Mary University of London recently. There were six days of ceremonies, with approximately 6,000 guests accompanying the delighted graduates at these celebratory events.

Queen Mary University of London and the Embassy of Hungary in London mark the 204th birthday of Dr Ignác Semmelweis, the Hungarian obstetrician responsible for identifying the cause of puerperal fever.

Queen Mary University of London is proud to congratulate its alumni who were recently recognised in the New Year Honours List 2023, the first of the reign of King Charles III.

Blog: Why is interdisciplinary research so often the exception, not the rule?
11 January 2023

When the size of the prize is so great, why is interdisciplinary research so often the exception, not the rule?

Research led by Queen Mary University of London, King’s College London and the Francis Crick Institute has identified a protein that makes melanoma, the most serious type of skin cancer, more aggressive by giving cancer cells the ability to change the shape of their nucleus – a characteristic which allows the cells to migrate and spread around the body.

Research and artwork on display in London next month explores how ‘twin town’ partnerships can create lasting cultural connections in a divided world.

Researchers from Queen Mary University of London’s Faculty of Medicine and Dentistry (FMD), including Dr Jane Sosabowski and Professor Kairbaan Hodivala-Dilke at Barts Cancer Institute (BCI), have received funding from the University and Barts Charity for a new piece of research equipment that will accelerate radiation research at Queen Mary.

Researchers at Queen Mary University of London have shown that zebrafish can provide genetic baz1b clues to the evolution of social behaviours in humans and domesticated species.

The small, feathered dinosaur Microraptor is preserved with the foot of a small mammal inside its ribcage.

Queen Mary University of London’s Dr Andrea Larosa was celebrated as the recipient of the American Geophysical Union’s (AGU) 2022 Fred L. Scarf Award at a recent reception in Chicago.

A Queen Mary University of London researcher’s work is one of 12 projects awarded funding by the UK Research and Innovation to integrate biodiversity and finance.

Government-led change is needed for trade policy to deliver COP27 promises, according to a new report from the UK Climate and Trade Commission, established by Queen Mary University of London in partnership with the Trade Justice Movement.

Professor Lars Chittka and Matilda Gibbons have co-written for the Conversation on insects' ability to feel pain.

Richard David Leslie, Professor of Diabetes and Autoimmunity at Queen Mary University of London, has written for the Conversation on stiff person syndrome.

Blog: The Many Contradictions and Unspoken Issues of COP27
13 December 2022

Laleh Khalili, a Professor of International Politics at Queen Mary University of London, ethnographically observed the proceedings at COP27. She is currently researching a major project on the politics of hydrocarbons, after having won a British Academy/Leverhulme small grant to explore the subject. She is hoping to write a book about the everyday entanglements of hydrocarbons in all aspects of our lives.

The UK Government has today (13 December) announced the launch of a Newborn Genomes Programme, a new research study that will explore the effectiveness of using whole genome sequencing to detect rare diseases in newborn babies.

A PhD research project conducted by Queen Mary’s Dr Jessica Marsh in conjunction with the Game and Wildlife Conservation Trust (GWCT) has revealed the importance of water crowfoot – an aquatic plant found commonly in lowland rivers – in the conservation of young Atlantic salmon.

As the Office for National Statistics reports that Britain has become less religious, a new study from Queen Mary University of London details how faith groups can learn from Covid-19 to create new connections among different communities.