The joy of mobile cinemas: Screening PILI in rural Tanzania

Engagement and Enterprise Awards Winner Sophie Harman shares her work producing PILI, a film capturing the real stories behind her research into women living with AIDS/HIV in Africa involving real women living with the condition itself.
Published:
8 March 2017 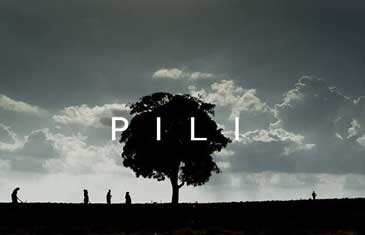 Written by Sophie Harman, Senior Lecturer in Politics at Queen Mary University of London and the Producer of Pili

This year I produced my first ever feature film – PILI – as part of a wider project on the everyday risk of HIV/AIDS treatment and care. PILI is a different kind of film and a different kind of research project. 65% of the cast are HIV positive and the story was devised from talking to 85 women from the Pwani region of Tanzania.

The women you see in the film live the lives of the main characters, many live on less than $2 a day, work in the fields, and struggle with a range of health issues and managing a family as a ‘left one’ left behind by their husband. With the exception of one actor in the role of ‘Mahela’ none of the cast had acted before. All of the locations you see in PILI are real, and support from local Doctors and health professionals allowed the crew to film in HIV/AIDS care and treatment centres. Any money made by the film will go back to the women and communities in which they live.

The film is therefore both an output of new research – a new story co-produced with the women in the film – that sees participants as research partners and a form of communicating my existing work on HIV/AIDS, gender and global health, and African agency to wider audiences.

The cycle of a film’s life follows a common trajectory: pre-production, production, post-production, closed cast and crew screenings, international film festival premiere, and then (hopefully) a distribution deal. PILI has followed a similar cycle, however given the uniqueness of the film and the importance of the women in it, the cast screening took on a different form: to screen the film to the women and community in it we had to set up mobile cinemas in Tanzania.

In October, I set up two mobile screenings of PILI, with the help of an entertainment company from Dar es Salaam, a projector, a screen, a laptop, and two massive speakers. The Miono cast was filled with drama and tension, laughter and a lot of hugs and gossip. It was without doubt one of the most overwhelming highlights of my career.

By 6.30pm people started to arrive and an aura of chaos surrounded proceedings as one of the set-up crew began negotiations between a mandazi seller and the kids that had been following the crew around. At 7pm I arrived with the cast of women to a crowd of 250 people. Children sat on the floor to the right, the cast sat on chairs to the left, tables acted as benches for the first line of seated audience members, people stood behind them three rows deep, some people sat on shoulders, and then pockets of people broke from the crowd in their own groups. By 7.30pm it felt like the crowd had doubled as more people came, school children emerged from their late afternoon classes, and the audience was continuously lit up by piki-piki and bus lights as more people were transported to the screening.

Throughout the film the cast were smiling. Smiling and laughing. No-one in the cast seemed awkward about seeing themselves on screen. They had all introduced themselves and their characters at the beginning of the film. We had agreed this was the best thing for them to do so that everyone understood they were playing a character. This was really important for Bello Rashid who plays ‘Pili’ – as the lead, she is in every scene and her character has to make increasingly difficult choices. Bello is such a good actor that you believe ‘Pili’ is real, and while there are similarities to their lives, it does not mean she would make the same decisions.

At the end of the film I got all the women to stand at the front and take a bow. Miono is not a big clapping audience and instead we just got encircled by cheering children – particularly the twins who play Pili’s son ‘Ibrahim’ in the film. As soon as the credits ended everyone walked off home ready to return to work the next day.

The morning after the Miono mega-event we conducted a smaller screening in Makole – the location for Pili’s house by the side of the busy road. The screening was much smaller at 30 people, but allowed me to engage with the audience in more depth about their thoughts and reactions to the film.

PILI would not be an educational or informative film to the Pwani audiences as the story of the film is meant to reflect some of the everyday risks and issues they encounter. However, the content is meant to provoke a reaction and create a space for discussion over such issues: it is one thing to recognise something, and another to reflect on it.

At the end of the screening the Makole audience discussed the decisions Pili made and the element of choice she had in making them.

The screenings of PILI in Miono and Makole allowed the women whose stories are told and appear in the film to see it before a worldwide audience and to gain greater engagement with the issues raised among the community in which the film is set. However it also worked as a preliminary model for how mobile screenings could be used to engage audiences on the issues raised in the film – self-stigma, single parenthood, treatment adherence, micro-lending, and the multiple risks people encounter every day.

Our intent to make a drama rather than a documentary was to appeal to as broad an audience as possible and to make something Tanzanians would want to watch. The October screenings showed audience is not a problem and that if you build the cinema, people will come. Based on the success of these two screenings, I plan to work with the Tanzanian Commission for HIV/AIDS to see how we can take PILI on tour to the rest of Tanzania. As one of the actresses, Sesilia, said at the outset of the project ‘Pili is everywhere.’

Further information on PILI can be found on IMDb, Facebook and Twitter @PiliFilm. For more on the making of PILI there is a blog on the project website with updates from the start of the process and this article published in African Affairs.

Sophie Harman and PILI were joint-winners of the 'Involve' Award at the QMUL Engagement and Enterprise Awards 2017.