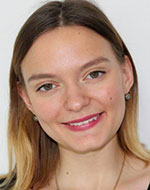 Unprecedented technological progress, globalisation and the Covid-19 pandemic have enhanced the need for transnational regulation of social media platforms. This PhD project develops a foresightful approach to international law to adequately adapt to the role of social media companies in the digital age. With that, the PhD seeks to contribute to the international law framework’s efficiency in light of the 21st century.

Esther is a published poet and novelist, and she believes that imagination and creativity must be at the centre of cutting-edge solutions for 21st-century global challenges. Previously Esther contributed to various NGOs, institutes and think tanks, including the United Nations Office on Drugs and Crime, Spielberg’s Shoah Foundation, and Leiden University’s Innovation Centre. Esther graduated with an LL.M. from Queen Mary University and an Honours Degree in Global Challenges & International Justice at Leiden University College The Hague. Alongside her PhD, Esther works as a project manager at Blue Globe Innovation, contributing exciting research on the future of technology and hosting a podcast on social innovation. Esther is fluent in English, German, Spanish, Russian and Italian. She has recently produced the short-film adaptation of her first novel ‘Escape’, telling the story of human rights enforcement in youth communities in London.