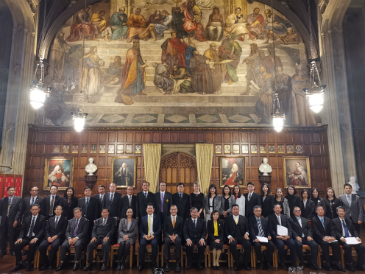 In June, the School of Law welcomed a delegation of 35 Thai Judges who came to Queen Mary University of London for a fortnight for lectures, workshops and case studies on Consumer Protection Law.

This event followed on from a very successful conference for a different group of Thai Judges in 2018 on Employment Law. The 2019 conference included sessions on marine insurance law, class actions, medical negligence, consumer credit, unfair commercial practices and arbitration.

The teaching largely took place at the Centre for Commercial Law Studies on Lincoln’s Inn Fields, very close to where the Judges were staying in Club Quarters Hotel. Many of the sessions were delivered by our academic staff in the School of Law and included a combination of lectures and workshops, or case studies. We also hosted visiting speakers from practice – including John Doherty and Nick Bamber from Penningtons Manches LLP, and Matt Kelly from Eversheds Sutherland LLP.

The Judges took a tour of Queen Mary’s Mile End campus followed by lunch in the foyer of the Law Department. They also visited the County Court in the Royal Courts of Justice where they were kindly hosted by HHJ Heather Baucher and HHJ Simon Freeland. The delegates were then invited to sit in on two brief hearings.

At the weekend, a coach was organised to take the delegates to Oxford where they took a tour of Christ Church College.

The goodbye dinner was held in the Great Hall at Lincoln’s Inn and was attended by four members of the Royal Thai Embassy, including Mr Tull Traisorat, Minister Deputy Chief of Mission, who is a Queen Mary alumnus, and Ms Thanida Techachokvivat, Minister for Education. Ian Walden gave a brief speech to extend his thanks to the delegates and to the representatives from the Royal Thai Embassy.

The Thai Judiciary have already asked us to organise a conference next year on Commercial Law. We are looking forward to hosting another group of prestigious delegates in 2020.