QM School of Law marks another successful year of mooting 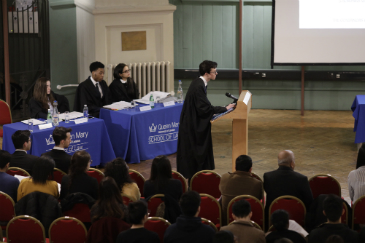 The School of Law at Queen Mary University of London marks another successful year of mooting, with the final of the George Hinde Mooting contest held on 27 March 2019.

After a welcome by Professor Penny Green, the students argued on an issue of judicial review and school exclusion related to jewellery worn for religious reasons devised by Dr Daniela Nadj. Lord Hoffmann judged this year’s final, and decided that private schools were not susceptible to judicial review and that pupils could not rely on religious freedom to avoid school rules regarding jewellery. He praised all the finalists but awarded the trophy to Palak Sikri. A fine achievement for a first year student. Stephen Karori and Ashy Venkatrajulu were the moot masters responsible for organising a well-run competition.

The George Hinde Moot final is one of the highlights of the School of Law calendar, named in memory of a much-loved Professor at the School of Law. The competition has been established for more than four decades and provides undergraduate students with valuable ‘real-world experience’ as well as insight into advocacy and the Bar.

We look forward to mooting in the coming year, providing further opportunities for QMUL law undergraduates to challenge and grow themselves and strengthen national and international legal and academic networks.