A regular glass of beetroot juice can reduce signs of inflammation in blood vessels that are known to be increased in people with coronary heart disease, according to new research funded by the British Heart Foundation (BHF) and presented at the British Cardiovascular Society conference in Manchester. 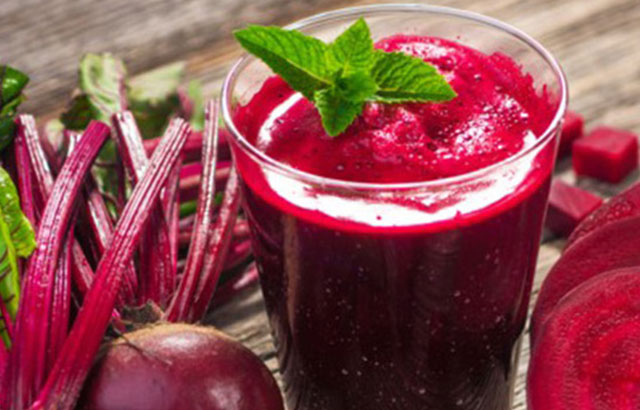 A full glass of beetroot juice.

Nitric oxide is produced naturally by the body and it’s vital for our health. In addition to its role in regulating blood pressure, nitric oxide has important anti-inflammatory effects. However, levels of nitric oxide are lower in people with heart and circulatory conditions as the enzyme that produces it is less active.

Researchers at Queen Mary University of London investigated whether a daily beetroot juice high in inorganic nitrate would increase levels of nitric oxide in a different way, and whether this would impact inflammation.

The team studied 114 healthy volunteers – 78 who were given a typhoid vaccine to temporarily increase inflammation in their blood vessels, and 36 who were given a cream to create a small blister on their skin to look at more localised inflammation. The volunteers drank 140ml beetroot juice every morning for seven days – half of them drank juice that was high in nitrate while the other half drank juice that had the nitrate removed.

In the group given the typhoid vaccine, those that drank the nitrate-rich beetroot juice had higher levels of markers of nitric oxide in their blood, urine, and saliva compared to those that consumed the low nitrate juice. They also had lower circulating levels of a type of white blood cell called the inflammatory monocyte, and the monocytes that remained in their blood became more anti-inflammatory.

The high nitrate juice also appeared to restore the function of the endothelium, the cells that line the inside of all blood vessels. The endothelium is crucial to keep blood vessels functioning normally, but this is lost in inflammation.

The team found that blisters healed more quickly in the group who drank the nitrate-rich beetroot juice, and the numbers of inflammatory white blood cells in fluid samples taken from their blisters were lower after three days.

The researchers believe that the increased levels of nitric oxide helped to speed-up how quickly the volunteers were able to recover from inflammation by switching key immune cells from a state that promotes inflammation to become more anti-inflammatory. They think this could have benefits for people with coronary heart disease, a condition which affects one in 30 people in the UK.

They’re now planning clinical trials involving people with coronary heart disease to see whether a high nitrate diet has similar effects to those seen in the healthy volunteers, and whether this can reduce the risk of heart attacks.

“Inflammation is vital to protect the body from injury and infection. However, in people with coronary heart disease persistent inflammation can exacerbate the furring of the arteries, making their condition worse and increasing their risk of a heart attack. Our research suggests that a daily glass of beetroot juice could be one way to get inorganic nitrate into our diet to help to interrupt harmful inflammation.”

“This research suggests that increasing the level of inorganic nitrate in your diet could help to reduce inflammation in your body. We know that inflammation plays an important role in the development and progression of cardiovascular diseases and therefore interventions that can dampen inflammation have potential as future treatments to tackle this.”