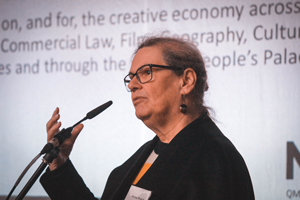 I have been a member of the School of English and Drama at QM for many years. My teaching and research have focussed on Modernism and on the Creative Economy. I have served as Head of School, as Vice-Principal for Teaching and Learning and as Vice-Principal for Humanities and Social. I was also the Director of Creativeworks London (http://www.creativeworkslondon.org.uk) and Network (https://networkcentre.uk).

I studied Drama and Philosophy as an undergraduate student at the University of Glasgow. After that I was very fortunate to have the opportunity to go to McGill University to do an MA in Communications, an interdisciplinary programme drawing on cultural studies, film studies, literary theory and cultural history. I then completed my Ph.D. at the University of Cambridge (supervised by Raymond Williams) on historical and theoretical questions associated with the concept of ‘popular culture’. I am a Fellow of the Royal Society of Arts and a Principal Fellow of the Higher Education Academy.

I am involved in research on knowledge exchange and the creative economy, and on the relations between creative practices and social transformation. I have been the PI on two major AHRC-funded projects in this area: Creativeworks London and Social Change through Creativity and Culture (Brazil). I was PI on a new AHRC-funded project, Creative Hubs and Urban Development Goals (UK/Brazil) from October 2016-July 2017.

I continue to work on the ways in which the activity of labour shapes human subjectivity, which I explored in detail in my monograph, Modernism, Labour and Selfhood in British Literature and Culture, 1890-1930, exploring in particular how the theorisation of ‘immaterial labour’ may help in the understanding of the economic and affective position of the modernist writer.

I have a close interest in the changing character and nature of domestic interiors in the early twentieth century. I have published a number of articles and chapters looking at the history of domestic technologies, at the psychological meanings of ‘interiority’ and at the ways in which modernist writers inhabited and represented interior spaces. This has been part of a broader challenge to the paradigms that frame historical and theoretical accounts of ‘modernity’, which tend to focus overwhelmingly on the meanings of public space. I have collaborated with scholars in the UK and internationally to explore these questions.

My interest in ‘marginal modernism’ is also part of my broader commitment to developing a richer history of modernism. I have worked on writers who have remained surprisingly marginal within histories of modernism (such as Hugh McDiarmid or Lewis Grassic Gibbon); on writers whose relations to modernism form part of their intellectual and affective fabric rather than their stylistic preferences (such as Aldous Huxley or H. G. Wells) and on writers who persistently sought to find new imaginative forms of representation to engage with and to overcome marginality (such as Virginia Woolf, May Sinclair, or Dorothy Richardson).

Finally, I am working on the relations between the cultural project of modernism and a range of initiatives broadly associated with language reform. This interest began when I was studying the work and life of Sylvia Pankhurst, who dedicated a huge amount of time and effort to promulgating an international language. But it is now developing into a much broader exploration of issues such as spelling reform, the project of ‘Basic English’ and the work of a writer such as Laura Riding, who sought to identify the core of ‘rational meaning’ within language.

I was a member of the AHRC Peer Review College, and then a Strategic Reviewer, from 2004-2013.

Morag Shiach and Karina Poli, ‘Creative Hubs and Cultural Policies: A Comparison between Brazil and the UK’, European Journal of Cultural Management and Policy 10:2 (2020), 21-38, https://www.encatc.org/media/5740-issue2_02_karina-poli-morag-shiach.pdf

‘Work, Modernism, and Thinking Through the Aesthetic’, in J Attridge and H. Rydstrand (eds), Modernist Work: Labor, Aesthetics, and the Work of Art (London: Bloomsbury, 2019), 211-16.

‘Lewis Grassic Gibbon and Modernism: “What’s wrong with the other moderns is the lack of purpose in their infernal books”’, in Scott Lyall (ed.), Companion to Lewis Grassic Gibbon, (Glasgow: Association for Scottish Literary Studies, 2015), 9-21.

I would welcome enquiries from potential doctoral students interested in any of the areas of my research. I have extensive experience of supervising research students, and also of examining doctoral dissertations at a wide range of universities.

In the past I have supervised the following successful projects:

As Director of Creativeworks London, I worked with an exciting range of people from London’s universities, cultural institutions, and SMEs within the creative and cultural economy. CWL was funded from 2012-2016 by the AHRC and also by the European Regional Development Fund. More information about how this enabled research collaborations, support for doctoral students and early-career researchers to spend time working with creative SMEs, and for creative entrepreneurs to collaborate with London’s universities, as well as the many and varied impacts of this work, can be found here.

Network: QMUL Centre for the Creative Economy works with creative and cultural partners and with third sector organisations locally, nationally, and internationally to support research collaboration and a range of innovation opportunities. In 2018 Network undertook a consultancy project for Tower Hamlets on ‘Creative clusters, social inclusion, and sustainability: The case of Hackney Wick and Fish Island.