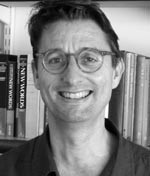 For my PhD I worked on Florio’s Montaigne with Lisa Jardine in the English Faculty at Cambridge. After a research fellowship at Trinity Hall, Cambridge and a stint as a fellow and university assistant lecturer at Queens’ College Cambridge I moved to the English department at Queen Mary in 1994. The wide range of approaches and disciplines happily accommodated in the department has allowed me to retain and develop early interests in translation, humanism, and intellectual history, and in late Renaissance European (especially English, French, and Italian) studies.

I have recorded videos about my teaching for Queen Mary's ADEPT programme, including this piece on undergraduate views on feedback.

I have taught the following undergraduate modules at QMUL:

I am currently developing and seeking funding and partners for a large collaborative project to produce a literary history of Europe, 1559-1648, centered on histories of literary objects and groups of objects. It aims to recover the dynamics of the transnational literary field—the itineraries, the circuits and networks traced by objects, people, forms, skills, knowledge between cities and regions across retrospectively imposed national borders. It is open to a whole range of literary objects that had a presence in social life and that are of interest to scholars in many different disciplines: words and inscriptions, texts and works, ephemeral and archival documents, manuscripts and printed books. It is interested not just in authors but in actors from publishers and readers to pedlars and players. It includes not only western and central Europe but also Scandinavia, east and southeast Europe, the Americas and other territories connected with Europe by trade, colonialism, missionary evangelism in this period. The range of languages of interest is correspondingly wide. I have spoken in the last couple of years about this project at CUNY New York, Berkeley, Padua, Mainz, UEA Norwich, Eötvös Loránd Budapest, York-Southern Denmark (videoseminar), ENS Paris.

The project emerged from the two-volume study I published in 2017 with Oxford University Press on The School of Montaigne in Early Modern Europe, which analysed and followed the objects, actors, forms and skills comprising Montaigne’s literary heritage as they moved across Europe. 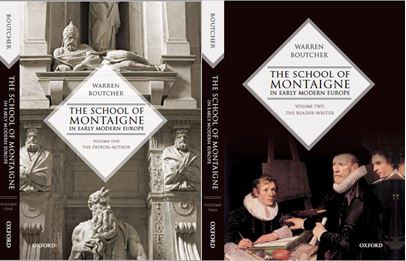 Patrick J. Murray in the Times Literary Supplement of September 29, 2017: ‘[Warren Boutcher] gives us an in-depth account of Montaigne’s literary influence across the Western world from the sixteenth century to the present day. … [T]he two volumes … represent a remarkable achievement, and one that is all the more impressive in light of its single authorship. Boutcher turns his adroit hand to subjects as various as paratextual literature, German idealism, Roman statuary and papal censorship’.

Peter Platt in Renaissance Quarterly (vol. 71, 2018, 397-400): ‘Warren Boutcher's prodigious - and prodigiously important - book is in some ways a remarkably understated project. ... For the school of Montaigne has had - and continues to have - textbooks in many editions, countless students, myriad teachers. Warren Boutcher is, quite simply, one of its finest instructors.’

George Hoffmann in Renaissance and Reformation (vol. 41, 2018, 152-154): ‘Resembling nothing so much as an Anthony Grafton of vernacular scholarship, Boutcher leaps from France to the Netherlands, from England to Italy, and from Spain to Germany in order to track thousands of interlinked references to the Essays. … . The book’s impressive span aims at two distinct ends: as a summation of Montaigne’s reception and influence, Boutcher’s School of Montaigne stands as a reference work for all scholars and the starting point for those likely to want to explore these questions further; at the same time, it mounts a novel and provocative challenge to current literary studies in how it shows that contextualization can not only determine historical actors, it can liberate them.’

Interviewed for BBC Newsnight, Thursday 9th December 2010, in a report on the new student fees regime and what the future of higher education holds.

Interviewed by Faculti Media about recent research on the application of Alfred Gell's anthropological theory of art and agency to literature: