Greece’s Covid-19 Response: Not Beyond Reproach

Greece emerged as the EU’s poster child in the fight against Covid-19 during the first few months of the pandemic. Its approach, while effective, is not beyond reproach. We analyse two such contested areas of Covid-19 regulation: permits of movement obtained through SMS, and restrictions to the freedom of movement of asylum seekers. Our analysis draws from our forthcoming article in the European Journal of Risk Regulation (2021). 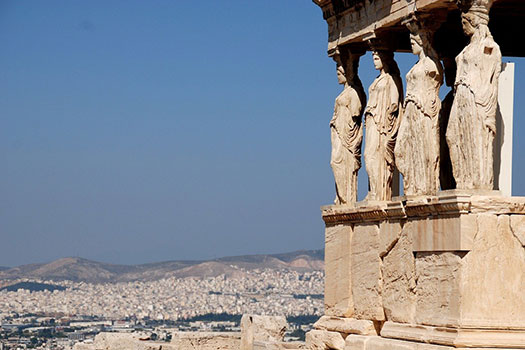 The Curious Case of Permits of Movement Obtained Through SMS

A primary way to contain the spread of Covid-19 has been the imposition of physical distancing through temporary lockdown and stay-at-home requirements. The Greek government issued a ban on all unnecessary traffic from March 23, which lasted until 4 May. Similar restrictions of movement of various degree and intensity were further imposed on November 1 and are currently ongoing. Anyone on the move falling within one of the expressly listed exceptions, such as grocery shopping, appointment with a doctor or a public authority etc. is required to carry an identification document as well as a permit of movement. This form can be obtained by filling out an online form, or –the most popular option- sending a mobile message to a dedicated number the General Secretariat of Civil Protection (Γενική Γραμματεία Πολιτικής Προστασίας) operates. In obtaining permission via SMS, the individual is required to provide their name and surname, code number corresponding to the purpose of movement and residence address. In the event of a random police check individuals are required to demonstrate their permit, otherwise a fine may be imposed.

Interestingly, the rules on the processing of personal data obtained through SMS have been released online merely through a ‘soft law’ document on the ‘data protection policy’, without prior scrutiny, consultation or transparency. In turn, despite the increasing volume of Covid-19-related legal instruments, the requirement for permits of movement is not laid down in law. The policy is written in Greek only, which does not enable foreigners living in the country to obtain information as to how their personal data are being processed. The policy explicitly proscribes centralised storage and thus data must be deleted immediately, but there is possibility that data are anonymised and used for statistical purposes.

The policy has raised significant concerns due to its use of legal language that may not be understandable and accessible to the public; the lack of reference to the fact that sensitive data is collected -as one of the exceptions justifying movement is a doctor appointment-; the confusion as to whether the information submitted by individuals could be transferred to third parties, and in general as to who the recipients of the information contained in an SMS are. Furthermore, Article 13 of Regulation (EU) 2016/679 (GDPR) requires that persons whose personal data are processed must be informed about the purposes of the data processing and the details of the data protection officer, both of which elements are missing from the policy. Despite these concerns, the Greek Data Protection Authority has not issued any relevant guidelines. Besides, with the reintroduction of the requirement for permits of movement in November 2020, the data protection policy re-emerged online without any revisions to address the voiced concerns.

More worryingly, in November 2020 it was made known that an automatic decision refusing a permit of movement is possible in cases of an increased number of messages coming from specific geographical areas. This automated individual decision-making significantly affects the position of individuals - according to Article 22(2)(b) of the GDPR, automated decision-making may take place for specific reasons, one of which is if authorised by a Member State, which applies in the present case. However, that Article further requires safeguards to be laid down, at least ‘the right to obtain human intervention on the part of the controller, to express his or her point of view and to contest the decision’. This is not the case here.

Finally, doubts as to whether SMS data are anonymised or remain personalised have also been voiced. Whereas it may be useful for the administration to know how many people send an SMS invoking a particular exception as a reason for movement, it is worrying that in the case of protests that took place in front of the American Embassy on 17 November 2020, authorities were aware of the reason of movement its participants had used to obtain their permit of movement.

Overall, this lack of transparency and clarity in the elaboration of the data protection policy raises significant issues of circumvention of the legislative process and unlawfulness. By elaborating the data protection policy through ‘soft law’ the importance of the rights to respect for private life and protection of personal data has been downgraded, and data protection law seems to have been relativised for reasons of public interest and public health. A negative precedent of normalised, unlawful processing personal data en masse has thus been created.

Restrictions to the Freedom of Movement of Asylum Seekers: A Case Study in ‘Othering’?

During the first wave of the pandemic, with the exception of implications for privacy and data protection, a series of generally applicable measures have been largely necessary and proportionate, as we analyse in greater detail here. This is due to their time-bound nature, their active review, and their prompt lifting based on objective indicators, such as the epidemiological situation in the country.

A different position altogether was adopted regarding restrictions on the freedom of movement of asylum seekers. On 17 March 2020, the General Secretariat for Reception of Asylum Seekers of the Ministry of Immigration and Asylum issued several guidelines (‘οδηγιες’), the so-called ‘Agnodiki plan’, that were addressed to all asylum reception centers, as well as reception and identification centers, in Greece. The guidelines, a soft law instrument, set out different levels of Covid-19 response. They established far-reaching restrictions, including the suspension of any recreational activities and schooling. They also limited the movements of asylum seekers both outside and within these centres to those strictly necessary.

Upholding these far-reaching limitations, which deviated from the restrictions applicable to the general population both in terms of the nature of the measures and of their duration, through guidelines alone would have been constitutionally dubious. These initial soft law guidelines were, however, swiftly followed up by legally binding measures. Ever since restrictions are specified and concretely based on legally binding measures. However, the soft-law ‘Agnodiki Plan’, is the document which sets out the overall operational philosophy and, hence, underpins these legally binding documents. On 21 March 2020, a Joint Ministerial decision was issued (D1a/GP.oik20030/21/3/2020, OJ 985/2020) crystallising far-reaching restrictions to the freedom of movement of asylum seekers in Reception and Identification Centers, initially for a one-month duration. These limitations included the possibility to circulate outside the centers, but only between 07:00-19:00, and only for the purpose of covering ‘basic needs’. In addition, the decision abolished any activities in the centers and camps other than those related to housing, subsistence, and healthcare provision. These restrictions were repeatedly renewed through subsequent legal instruments, most recently until 1st March 2021. Moreover, apart from these generally applicable restrictions, even stricter restrictions applied in specific centers based on joint ministerial decisions (OJ 1584/2020 extended several times).

There are several legal concerns with the approach Greece took regarding asylum seekers. First, the conditions in several of these centres arguably violate the principles of human dignity and the prohibition of inhuman or degrading treatment. To illustrate, asylum seekers on the islands’ ‘hotspots’, where many are accommodated, face unsanitary conditions. There was only one shower for every 500 people, and one toilet for every 160, and meal services were congested. This led the European Commission, Members of the European Parliament, numerous civil society organisations, and the EU’s Fundamental Rights Agency, the European Court of Human Rights, which ordered interim measures in the case of E.I. and others v. Greece, to call for the evacuation of refugee camps in Greece and for the activation of intra-EU solidarity measures. Despite these calls, neither Greece nor the EU facilitated a mass evacuation of these camps. Instead, the EU facilitated small scale, ad hoc relocation, meaning intra-EU transfer of asylum seekers from Greece to other Member States, mainly targeting unaccompanied minors as one of us has analysed here.

The second observation relates to restrictions on freedom of movement of asylum seekers. These restrictions were not only incompatible with fundamental rights due to the living conditions in camps, but were more intense and lasted longer compared to those applicable to the general population. According to international human rights law,[1] while freedom of movement can be restricted for reasons of public health these restrictions should also comply with the principle of necessity (see ICCPR, art 12, para 3). With the easing of restrictions for the general population based on the improved epidemiological situation in the country, it is not clear whether this condition was fulfilled, and on which basis the risk posed by this specific group was assessed. If anything, immobilising asylum seekers in squalid conditions, where social distancing and other hygiene measures were rendered almost impossible, arguably jeopardised both public health and their right to health.

Greece’s handling of the first wave of the pandemic, while effective, was not beyond reproach. The greatest victims were asylum seekers who saw their right to freedom of movement arguably unjustifiably restricted when limitations were lifted for the rest of the population. The permits of freedom of movement through SMS also raise issues of compliance with privacy and data protection safeguards, which persist to date. With Covid-19 restrictions currently in full swing, it is to be hoped that Greece’s and the EU’s responses will place the health, dignity, and fundamental rights of every individual at their core.

[1] Greece has neither signed, nor ratified Additional Protocol 4 to the ECHR which establishes in its Article 2 the right to freedom of movement.