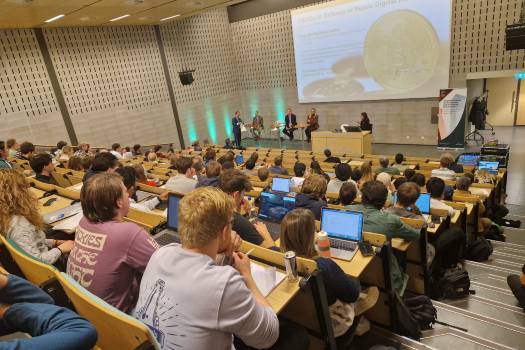 In her keynote speech, Professor Lastra argued that digitalisation has reached the shores of central banking and that the trichotomy of cryptocurrencies, stablecoins and CBDCs is challenging established notions of money and monetary sovereignty, as well as reviving the old debate between state theory of money and societal or market theory of money.

Money is changing nationally and internationally. But money remains a public good. While at the national level this justifies the public ordering of the monetary and payment system, at the international level, it will also require a normative framework. The lecture also explored how traditional legal categories such as legal tender are adapting to the digital space and the future of international money.

Watch the full lecture on the Erasmus School of Economics' YouTube channel.

Professor Rosa Lastra is Sir John Lubbock Chair in Banking Law and Chair of the Institute of Banking and Finance Law at Queen Mary University of London.