The George Hinde Moot final is one of the top highlights in the QMUL School of Law calendar, named in memory of a much-loved Professor at the School of Law. The competition has been established for more than 40 years and provides undergraduate students with ‘real-world experience’ as well as an invaluable insight into advocacy and the Bar.

We are thrilled to announce that Deputy President of The Supreme Court, The Right Hon the Lord Mance will judge this year’s competition final which will be taking place on Wednesday 21 March at 18:00.

To give you more insight into mooting at QMUL, we sat down with the 2017/18 Moot Master Aymen Ati and Moot Mistress Marie-Ange Symmonds to find out more about them, mooting in general and what this year’s competition has in store. 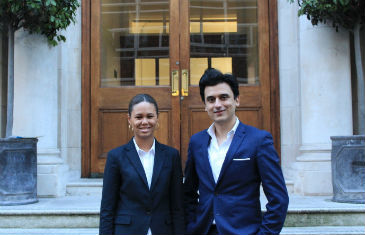 Tell us a bit about yourselves

Aymen – I’m a final year Law and Politics student. I used to study medicine, left that to become a poet, worked as a food taster, worked in advertising and then worked as a Delegate at the UN Human Rights Council. I wanted to study Law, so applied to QMUL.

Marie-Ange – I am a final year senior status student. I did my first degree in International Development. I’m also an international student from Barbados and living in London has been fun, different, exciting, and coming to Queen Mary has been quite different in its own way as well. It’s been its own academic challenge but also a great path for learning, experiencing new things, new cultures, and meeting new people.

Why did you choose to study Law?

Aymen - It initially stemmed from an interest in justice and a desire to help people who I felt were being oppressed. I was somewhat disillusioned by the effectiveness of political accountability, so the sharpness of the law and the opportunity to ascertain concrete remedies for people being aggrieved are things I found very attractive

Marie-Ange – I always thought I was going to do law from the time I was quite small, and there was no way I wasn’t going to spend my life in an academic field deconstructing arguments and persuading people to see the other side. I did my first degree in International Development and throughout that degree, I started to slowly realise that law is what I do like and what I do love. Law really governs everything and anything we do, and to me it’s important to ground your understanding in the foundations of the subject.

What has been the highlight of your academic careers so far?

Aymen – Two things stand out in regards to highlights. In first year, I was awarded the best first year student award, ranking the highest in my year. I had come from a very unusual background and I wasn’t sure that I could really pull off being a Law student, so it was a personal vindication that gave me confidence in my abilities, and it was also nice to have that recognition of my hard work from the Law department. In second year I think it was actually winning the George Hinde Competition. That was a special moment when Lord Philips announced my name, I think I’ll never forget that, however far I go in my career or whatever I end up doing, I’ll always remember that moment. It’s actually quite emotional!

Marie-Ange – Well, for myself I completed a degree in International Development which greatly expanded my knowledge base and helped me to think critically about global issues . Since pursing Law I have enjoyed mooting, I mean I haven’t been first in the year or I didn’t win the George Hinde but I was a semi-finalist which was exciting for me as having never mooted before this was a big accomplishment. So the highlight of my academic career would be taking part in all these different, unknown experiences and opportunities and doing really well in them.
How can QMUL students get into mooting?
Marie-Ange – They should definitely join the George Hinde competition, it’s the main internal moot that the university holds. It’s a six round competition where there is loads of room for growth. We hold numerous workshops usually one before each round. These might be with the Moot Master and Mistress, a previous winner, a barrister or even a judge, which means there is a lot of room for improvement of advocacy skills as you progress throughout the competition.

Why are you excited about Lord Mance being involved?

Aymen – There was an element of a personal connection as Lord Mance was meant to judge the final in last year’s competition and that was all planned and organised by the Supreme Court, which had to be rescheduled due to the events in Westminster. Lord Phillips kindly stepped in.

I was also really keen to get Lord Mance involved this year due to his calibre of being such a titan of our judiciary. We study him day to day as Law students. In last year’s moot final for example, the main authority I relied upon, the case of Tariq, was one in which Lord Mance gave the leading judgement. This is testimony to his intellectual acumen, and perhaps the reason why he has recently been promoted to Deputy Head of the Supreme Court.