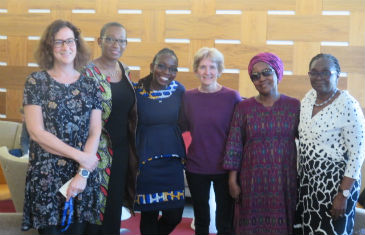 On 7 September 2018, the Center for Research on Law, Equity and Diversity (LEAD) at the Faculty of Law at Queen Mary University of London hosted the launch of the book International Courts and the African Woman Judge: Unveiled Narratives (Routledge, 2018). The book examines the life and professional accomplishments of seven women judges from African countries who have served or are serving on international courts and tribunals. The book’s innovation and contributions are enhanced by masterfully combining the lived experiences of the women judges with legal narratives, postcolonial theory and feminist legal theory. Prof. Kate Malleson opened the event with her welcome remarks, during which she commented on the scholarly contributions the book makes to the literature on international courts, gender and judging.

Josephine Jarpa Dawuni, the lead editor of the book discussed how her motivations for the book project developed out of the dearth of literature on women judges from the African continent. Commenting on the generalizability of the book, she noted that based on feedback from earlier book discussions, “women judges who are not from Africa are able to relate to the narratives of the seven women judges in this book. There are many similarities in these narratives that speak to the experiences of many women judges on international courts.” She hinted that these experiences include the politics of judicial selection, the challenges of combining personal and professional obligations, the need for judicial selection processes to be open and gender inclusive, and the power of using legal narratives as gateways to mentoring younger generations of women and girls.

The event featured two international judges. Judge Florence Ndepele Mwachande Mumba, a retired Supreme Court judge of Zambia, former judge of the International Criminal Tribunal for the former Yugoslavia (ICTY), International Criminal Tribunal for Rwanda (ICTR) and currently a Judge on the United Nations Extraordinary Chambers in the Courts of Cambodia (ECCC). Judge Mumba shared her experiences on how she enrolled at the University of Zambia to read law, at  a time when law was considered the sole preserve of men. She noted that from the very beginning of her professional career, she has had to negotiate different power structures and hierarchies. Notwithstanding the myriad of challenges, she has persevered and reached the highest levels in her career. She noted the importance of this book in highlighting and documenting the achievements of women history makers from the African continent. She further stressed the importance of this book to speak to future generations of women and young girls to pursue their dreams and ambitions without giving in or backing down.

Tabeth Masengu, a Senior Researcher at the Democratic and Gender Research Unit (DGRU) of the University of CapeTown served as discussant. In her remarks, she highlighted the importance of new research in placing the experiences and contributions of women judges from Africa within the larger discourse on gender and judging. She mentioned how refreshing it was that the book celebrated the achievements of African women as opposed to the common themes of African women as victims of human rights violations or women who lack agency. She also noted the importance of mentors or role models and recalled how the various judge’s role models included amongst others, parents, trail blazing women lawyers and even doctors.

The Question and Answer period/discussion period was lively, with questions ranging from how the justices see themselves in the international legal forum, why they decided to embark on their individual careers and the impact they see themselves having on the legal and judicial arenas in their respective countries.