Inside Justice: Storytelling the Law

Inside Justice: Storytelling the Law is a public engagement programme aimed at Key Stage 2 and 3 students, developed by the School of Law Queen Mary University of London in collaboration with creative consultant Jo McCallum. 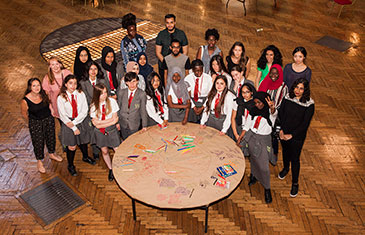 The School of Law, Queen Mary University of London (QMUL) is committed to developing innovative public engagement projects, including the award winning Inside Justice: Storytelling and the Law.

In June, thirty 12-14-year-olds from Sanders School, Hornchurch and the Skinners Academy, Stratford took part in a one-day event in QMUL’s opulent Octagon building. Working with Creative Consultant, Jo McCallum, students used co-creation and storytelling techniques, to learn about criminal law, the Crown Court, and those people involved in the system. Students were encouraged to build empathy, by developing an understanding of the different roles people play in a trial by jury. Each group then developed the story of a crime and a court case, which was performed through a series of lively role plays. The day concluded with a discussion of how the system might operate in the year 2050, especially considering the impact of technology, and population growth. 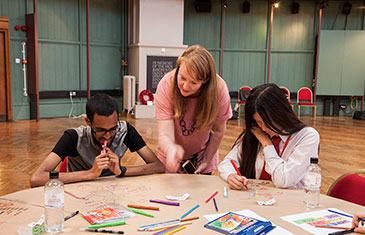 Creative Consultant Jo McCallum said: “Storytelling is such a great way to understand and empathise with others. In Storytelling and the Law, we wanted to find out how young people really feel about the law and their place in it. Working directly with young people is always thought provoking; we’ve learnt as much from them as they have from us. They’re never afraid to tell you exactly what they think and that is refreshing; we’ll definitely be using their feedback to develop new workshops focused on what the legal system might be like in the future.”

Widening Participation Co-ordinator, Sarah Heath said: “Inside Justice: Storytelling and the Law models how universities can engage with young people at an early age to inspire ambition and interest in a variety of careers. The project is not about recruiting students to QMUL, but about helping them to picture their future, and understand how creative skills such as writing, drawing, drama and teamwork are crucial to success.”

“The co-creation helped me to understand the law because we agreed and debated all our decisions.” 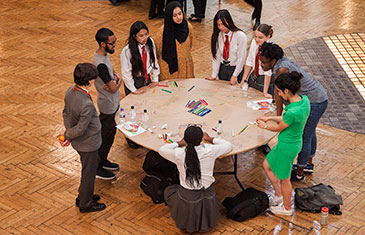 When we discussed our opinions, I heard what other people had to say, which helped me to expand my understanding of the law."

“Co-creation and storytelling helped me to understand law because we learnt about the people involved, not just the facts.”

"Empathy can help in the court room, as you put yourself in someone else's shoes."

"teamwork helps to get things done quicker, and with more opinions involved."