Gerard Sanders, General Counsel of AIIB, gives a lecture on the heritage and innovation of this newly created Multilateral Development Bank 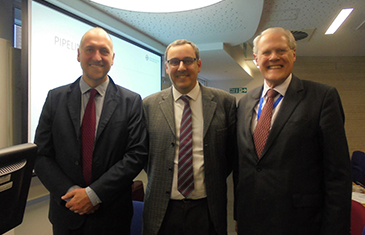 On Wednesday 15 February 2017, Gerard Sanders, General Counsel of the Asian Infrastructure Investment Bank (AIIB) gave a lecture on the heritage and innovation of this newly created Multilateral Development Bank for LLM in International Economic Law students and other LLM students attending the module Law of Finance and Foreign Investment in Emerging Economies.

The General Counsel of the newly established Asian Infrastructure Investment Bank (AIIB), Gerard Sanders, visited CCLS on 15 February. He gave a lecture arranged by Dr Gabriel Gari, the Academic Director of the LLM in International Economic Law on this newly established Multilateral Development Bank. Under the title “Heritage and Innovation”, Mr Sanders discussed the innovative features of this institution but also the practical ways in which the AIIB is already cooperating with existing MDBs in providing the much needed finance for infrastructure for Asian countries and beyond.