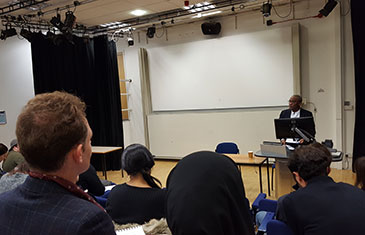 The Centre for Law and Society in a Global Context (GLSGC) organised an event at Queen Mary University of London (QMUL) on ‘Decolonizing Human rights: From State-Centric Enforcement to People-Centered Practice’ by Abdullahi Ahmed An-Na'im, Charles Howard Candler Professor of Law at Emory Law, 30 November. The event was chaired by Dr Shazia Choudhry (QMUL) and was highly attended by academics, students and professionals.

The aim of the talk, as suggested by its title, was to decolonise human rights. Professor An-Na'im’s main contention was that the current hegemonic conception of ‘universal’ human rights is actually a western and liberal relativist perspective which was globalised. The Universal Declaration of Human Rights (UDHR) itself was fashioned by the primary abusers of human rights, the colonial powers, who continue to dominate the structure and system of human rights protection.

The paradigm not only marginalises ideas of community, education and economic and social rights, but it bolsters notions of state-centric legality, justiciability and remedy to the point of elementary status. Such notions, for example, are inapplicable in a country where state boundaries, territorial sovereignty and jurisdictions are a myth. It is perhaps these charges which prompted a member in the audience to ask during the Q&A whether An-Na’im’s critiques were more of a critique of the law in general, to which he gave the example of Sudan where he would travel for days without encountering a single policeman. Indeed then, his lecture was a critique of the law where it does not belong, where it has no relevance or meaning to people’s lives.

Furthermore, according to An-Na’im, we must ask ourselves whose rights and whose concerns are taken seriously in the current system. It is the human rights of elites contesting ultimate power, the freedom of bloggers, which are prioritised over those in poverty, without housing and education, or those with environmental and intergenerational concerns outside the liberal rights paradigm. During the Q&A, Dr Jessie Hohmann, Lecturer in Law at QMUL, enquired as to where the United Nations Declaration on the Rights of Indigenous Peoples fits within his critique. For An-Na’im, it fits within the same inter-state treaty paradigm, whereby most guilty states avoid ratification, and the very nature of the channels required of the indigenous people to engage with in protecting their human rights involves a loss of identity.