QMUL's 'No Feedback' to feature in the Being Human Festival 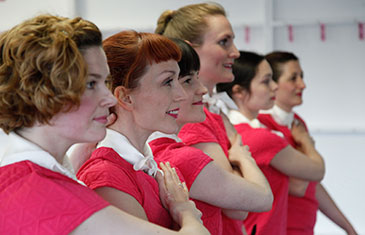 No Feedback, a performance led by Queen Mary University of London (QMUL), will be performed as part of the Being Human Festival of the Humanities, curated by the School of Advanced Study, the University of London. No Feedback is a theatrical event highlighting the gentle pull of discrimination that tears at the fabric of everyday life. It is set against the backdrop of catastrophes both historic and contemporary. Participation in the performance allows the audience to consider their own place on the continuum of how we relate to an “other.”

The performance will take place on Saturday 19 November, 6-7:30pm and will be held at Senate House, the building that was home to the Ministry of Information during the Second World War. It will be transformed into a ‘Ministry of Hope and Fear’ for this festival.

Dr Daniela Nadj, Lecturer in Public Law at QMUL, will be facilitating a session on genocide and international criminal law for the audience after the performance. In particular, she will draw on verbatim testimony of victims and witnesses of wartime sexual violence crimes, who testified before the International Criminal Tribunal for Rwanda, to illustrate the ten stages of genocide. Dr Nadj was first involved with the No Feedback production during its premiere in London in May 2015 at the Theatre Delicatessen, when she curated a session with a musician and a poet about genocide.

If you miss this performance, No Feedback will be at The London Jewish Cultural Centre on 26th of January and is coming to QMUL in February 2017.

Please note that there will further performance announcements soon, as well as recruitment calls for QMUL students who would like to adapt and perform No Feedback later this year.