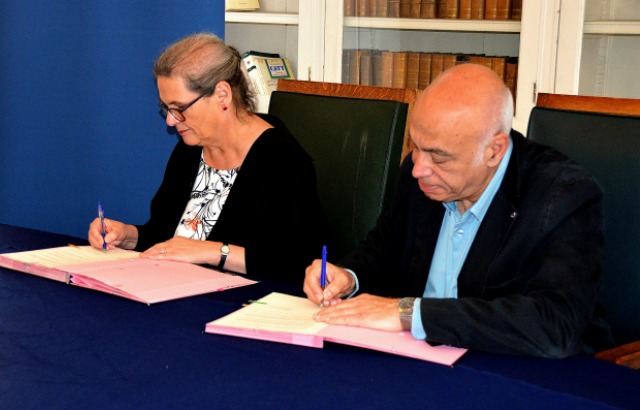 The Sorbonne-QMUL Double LLM, taught in English and French, will be offered over 18 months in Paris. The students will receive both an LLM in International Business Law from QMUL, and an LLM in French and European Law with the Sorbonne.

The innovative programme is developed by the Centre for Commercial Law Studies (CCLS) at Queen Mary University of London (QMUL) and the Sorbonne Law School. Teaching will take place at the University of London Institute in Paris and the Sorbonne. Students will study in small classes with professors from both renowned institutions, thus allowing a full immersion in both common law and civil law legal culture.

An agreement to launch the programme was officially signed in Paris on 4 July, by Professor Morag Shiach, QMUL Vice-Principal (Humanities and Social Sciences) and Professor Georges Haddad, President of l’Université Paris 1 Panthéon-Sorbonne.

Professor Morag Shiach said: “CCLS has developed an exciting range of new programmes in recent years, working with partners across the EU and in East Asia. The signing of this agreement with the Sorbonne will allow QMUL to offer a really innovative programme leading to two LLM degrees, where students will benefit from the expertise of academics and practitioners working in the context of two different legal systems. We hope this is the beginning of further close working in research and teaching with the Sorbonne.”

Dr Maxi Scherer, Director CCLS Paris and Co-Director of the Sorbonne Queen Mary Double LLM in Paris commented: “QMUL and the Sorbonne Law School both have experience in running highly successful LLM programmes in Paris. This new programme will combine our strength and provide students with a unique opportunity to study commercial and business law in both languages, from a comparative and international perspective. We look forward to welcoming our future students to this innovative and bilingual law programme.”

Professor Pierre Brunet, Programme Co-Director from the Sorbonne side said: “The Sorbonne-QMUL Double LLM will be a unique cultural experience culminating with tangible work practice and will facilitate successful integration into professional fields of law.”

Applications are now open for the January 2017 intake. To find out more about the course visit here, or email: SorbonneQueenMaryLLM@qmul.ac.uk.

For a French version of this announcement head here.