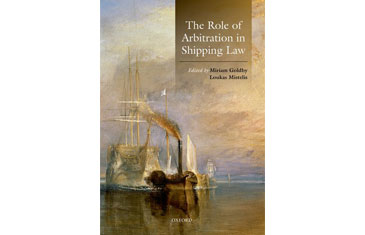 'The Role of Arbitration in Shipping Law' has been published by Oxford University Press (OUP). The book is edited by Dr Miriam Goldby, Senior Lecturer in Law, and Professor Loukas Mistelis, Clive M Schmitthoff Professor of Transnational Commercial Law and Arbitration, at Queen Mary University of London (QMUL).

The financial crisis of 2007-08 saw a marked increase in global shipping disputes that is still being felt today. In recent decades, arbitration has emerged as the dominant choice of dispute resolution in the global shipping industry, with the establishment of major maritime arbitration centres in London and New York, and the recent emergence of new centres such as Singapore and China.

At the same time, the immense advances that have been made and continue to be made in engineering, technology, and communications have led to the emergence of innumerable new trade practices, common understandings, and usages within which goods are carried by sea across the world, but which, because of the widespread use of alternative fora for dispute resolution, may be invisible to and unrecognized by domestic laws. This book asks: What are the implications of widespread use of arbitration for the continued development of shipping law? Are national laws on shipping destined to become ossified and obsolete? Is a new lex maritima emerging? And, most importantly, what is the role of the arbitral process in the evolution of shipping law?

'The Role of Arbitration in Shipping Law' brings together cutting-edge analysis of the development of shipping law and the role of arbitration within it, with contributions from a team of world-class academics and practitioners.