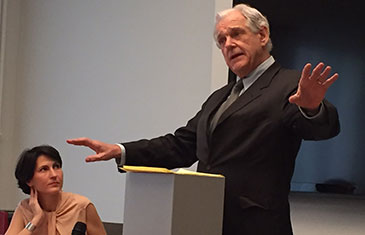 Dr Maxi Scherer, Senior Lecturer in International Arbitration and Energy at Queen Mary University of London (QMUL), moderated a debate on 'The Fate of Arbitration Agreements in National Courts' at August & Debouzy Avocats in Paris, 15 March. The debate followed a lecture on the topic from Professor George Bermann, which discussed how national courts in the United States and elsewhere deal with questions relating to the validity, scope and application of arbitration agreements. Maître Dupeyron, partner at August & Debouzy Avocats, commented on Professor Bermann’s lecture, comparing the US situation to the solutions developed in Europe, and in France in particular.