In this blog post, qLegal Student Adviser, Alessandro Pallavicini, describes his experience of 'FutureFest - Shaping Things to Come' a weekend event of immersive experiences, performances and speakers to excite and challenge perceptions of the future. 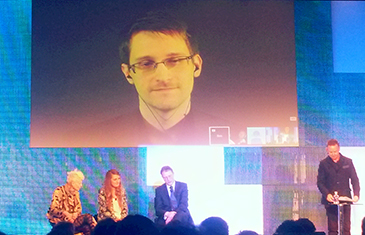 Alessandro Pallavicini is a Legal Student Adviser at qLegal, where he has also prepared workshops at Google campus and drafted toolkits on business related subjects for tech start ups. He is on the LLM in Commercial and Corporate Law programme at QMUL and his dissertation concerns the regulation of bitcoins and virtual currencies.

"Some people love London because of its nightlife. Some other because of the career possibilities it offers, because it fosters creativity and it boosts imagination. Others because of its multicultural and international glamour, surrounded by a British touch and a fast growing community of alternative businesses and people.

For as much as all these things are equally important in a city that wants to be progressive and forward- looking, there is one even more striking point about London: it thinks, and it promotes thinking.

On 14-15 March 2015, an incredibly fascinating event took place – a Festival of ideas at Vinopolis, near Borough Market, Southbank. The choice of that captivating location, just below the Thames and hidden amongst old beautiful buildings and railways, contributed to the success of the event.
The festival in question was ‘FutureFest – Shaping Things To Come’, a name that  introduces itself. The festival was divided into 4 sections of events: Immerse, Explore, Discover, Debate. Each had a different approach, based either on a physical, sensible, talkative, or mainly listening experience. The underlying motive, however, was the future, that big elephant in the room that, this time, was clearly not just seen, but also admired by each and every person present. It was an experience of the senses, to learn and see what the big issues are and will be soon, to exchange opinions, fiercely too, but with honesty. 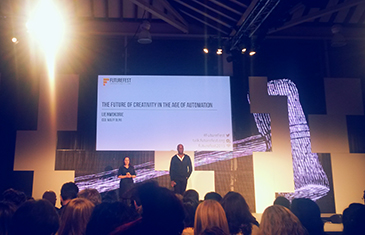 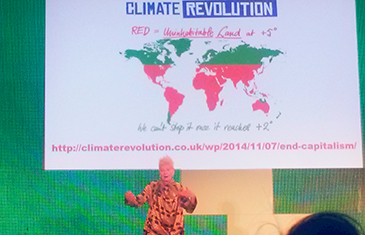 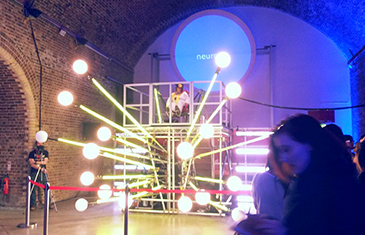 The atmosphere was great, and the organisation did a great job at moving around such a huge number of people without any glitches.

I had the pleasure to listen to some of the talks and to feel part of a wider debate that continuously thrilled the audience.

Although the theme was the future, the subjects changed and varied, and so did the speakers’ background and approach. Walking around one could stumble upon many installations, such as Neurosis, a virtual reality simulator controlled and stimulated by our own brain activity. Robots and automation were two key topics at the festival, and indeed My Robot Companion featured a robot whose face changed to become more resembling to the one the robot was ‘looking’ at, to make itself more human-like and, therefore, accepted. All you need is love, robots too.

A similar experience was the idea behind the blind robot. As the name suggests, the robot is blind, in a way that aims at creating a non-verbal conversation. This is accomplished by letting the robot touch one’s face in an attempt to recreate what sometimes blind people have to do to feel someone’s distinctive features and consequently get to know others.

Robots were not taking all the applause though, performances too were there to impress. In a holistic conception of arts, music and other senses can cooperate to create a multi-sensory experience, which is what happened with BitterSuite & Tanya Auclair performance.
Along with the sensory experience and the robots’ meetings, there were also many speakers who shared the stage to inspire, inform, or just share their visions.

Amongst them, one cannot forget Baroness Helena Kennedy QC and her heartfelt defence of democracy in an age where corporations and lobbyist’s power has undermined the capacity of citizens and governments to live by their own decisions and free will. What is democracy today? Where is the power? How do we hold those in charge accountable?

The most touching speech was perhaps delivered by Jon Ronson, who through the heartbreaking story of Justin Sacco, showed the audience the dark side of social media, how merciless it can be, and what world he would want them to be part of. A world where social is about sharing what is good, where companionship and friendship are stronger than anger and hatred. That world, not the present one he says, is the world he wants to live in. That world, unfortunately as proven by Sacco’s story, seems still too far away.
It was not all about social media though - Dr. Michael Osborne made a very convincing case about how automation is going to reshape the job market, mostly by eliminating a large number of jobs that will not be economically advantageous to be carried out by humans anymore. His research showed that the most difficult jobs to be taken over by automation are those related to creativity and to high skilled workers. Which one are you in?

Related to Dr Michael Osborne’s speech is Ije Nwokorie’s one. He advocated for a future where creativity leads the way of the job market, re-inventing the way companies approach employee’s efforts to put value in the company they work for through their own ideas. He claims how creativity should and will be the top skill for the jobs of the future because that is what employers and the market will be looking for. When someone from the audience asked - what about those people who are not creative when all the jobs will require that skill? Will they be unemployed? - Ije Nwokorie’s answer was priceless: we’ll teach them!

Two more speeches that in a way were on the same wavelength were those of Vivienne Westwood and Matthew Herbert. Although they started off on different grounds, the former with climate change and the latter with music, they both ended up with the same conclusion. The world deserves better than what we are giving back, and humanity as a whole can change, it only takes one person: you.
Finally, around 5pm on Saturday the 14th came the talk that possibly most were waiting for -  the one where Edward Snowden live on video from Moscow, talking with Nesta’s CEO Geoff Mulgan, Luciano Floridi, Vivienne Westwood and Breffni O’Connor, warned about the mass surveillance system that USA, UK and other countries have in place. Snowden, a former NSA agent, is currently in asylum in Russia since he leaked to the press confidential documents and information in regard with US surveillance system. His claim is that mass surveillance systems are not in place to protect us from terrorist attacks, but rather to spy on citizens and corporations. It is hard not to take his claims seriously, and the argument he makes, in whichever way is taken, is compelling: shall we reclaim part of the sovereign powers conferred to the State and require more transparency and less intrusion? Should the rule of law reestablish its power in an age where it seems like legality has been eroded by emergency situations which, ultimately, have not solved the problems that are said to have caused the emergency? When asked by Vivienne Westwood about which country, if US or UK, is more surveilled, he paused for a moment and the he replied, convincingly: oh, UK.

This and many other questions were raised, along with possible and plausible answers. As I said at the beginning, the best reason to be in London is, amongst others, its progressive touch, and the ability to make you think. We thank London for that."