Can the European Parliament save us from TTIP?

In this article, Sam Fowles, researcher in international law and politics at Queen Mary University of London, asks whether the European Parliament will 'save us' from the controversial Transatlantic Trade and Investment Partnership (TTIP). 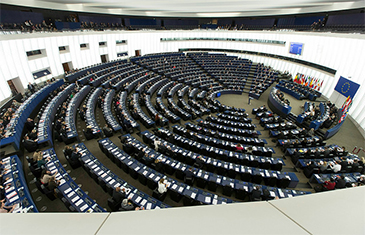 The European Parliament descended into chaos on June 9 when President Martin Schulz told members he was postponing a vote and debate on the Transatlantic Trade and Investment Partnership (TTIP).

Schulz said he had taken the decision due to the overwhelming number of amendments – some 200 in total – submitted by MEPs to the package of recommendations they were due to put forward on the deal. Those recommendations are intended to inform the European Commission’s TTIP negotiations with the US.

European politicians from both right and left attacked the parliamentary leadership for denying them the opportunity to air their views on the increasingly controversial treaty.

But the good news for them – and others who are concerned about the implications of this controversial, wide-reaching trade deal – is that Schulz’s ruling shows the tide is turning in Europe when it comes to TTIP.

TTIP is not the first trade deal to be negotiated by the EU. But it is the first that has been subject to public scrutiny. Trade negotiations mostly happen in secret. Negotiators claim this is necessary, arguing that revealing their positions publicly also means revealing them to the other side. In most cases the public hears very little about trade treaties until they are finalised.

That means discussion about these deals tends to focus purely on their economic impacts. Initially this was the case with TTIP. But a Europe-wide campaign by NGOs and civil society organisations, highlighting the social and political impacts of TTIP, has changed the discourse.

TTIP’s supporters promised Europeans economic growth. But its opponents have argued that this potentially comes at the price of compromises on food standards, healthcare, intellectual property and democratic governance. For the first time, elected representatives are being held accountable for their stance on a trade agreement and, for the first time, a significant number are reluctant to offer unconditional support.

As opposition to TTIP has mounted in the European Parliament, it has become clear that the challenge emanates from beyond the usual quarters.

Concern about trade treaties tends to be concentrated at the more progressive end of the European political spectrum. TTIP was initially no different, with Green MEPs relatively isolated in their criticism. Opposition to TTIP only became a genuine political threat in the parliament when the Greens were joined by other groups. TTIP has become an issue that unites left, right and centre.

Dissent has developed amongst members of the (centre left) Alliance of Socialists and Democrats (which includes the French Socialist Party, German Social Democratic Party and British Labour Party) and the Eurosceptic Europe of Freedom and Direct Democracy (EFDD) group. Indeed, MEPs from the UK Independence Party, the largest domestic party in the EFDD were the most vocal in their protests at being denied a debate on TTIP.

Opposition from the European right is surprising and telling. As recently as October 2014, UKIP’s William Dartmouth was pushing for the opening up of the UK’s National Health Service to international competition as part of TTIP. In the past, UKIP leader Nigel Farage, refused to state any open opposition to the treaty. This week he described it as a plot to create a “marketplace in which the giant corporates can dominate”.

It is possible that the Europe of Freedom and Direct Democracy group – which includes UKIP – simply views the TTIP debate as an opportunity to highlight a lack of transparency in the EU. The European side of negotiations is being led by the European Commission and, with 92 per cent of all consultations on the treaty dominated by corporate lobbyists, MEPs are under increasing pressure (Farage alone claiming to have received “over 10,000 emails”) from their constituents not to get shut out.

As such, although they might not oppose a similar treaty in principle, while it comes in the packaging of TTIP, the EFDD finds itself in an unlikely coalition with the left and centre left.

Can they stop it?

Despite opposition from both left and right, TTIP will probably pass through the European Parliament. The postponed vote is to approve the EU’s negotiating position, not the treaty itself. Whether or not the EP eventually passes the negotiating position the final treaty is likely to look different because it will inevitably represent a compromise between the EU’s position and that of the US.

What’s more TTIP retains the support of the European People’s Party, the largest group in the European Parliament. It is also likely to receive support from the majority of MEPs in the Conservatives and Reformists group and the Alliance of Liberals and Democrats group. It is likely that the EP will be asked to vote again on the final text of the treaty but, if TTIP retains the support of these groups, it is likely to pass, if only with a small majority.

This would explain Schulz’s decision to avoid a vote that he would probably have won. Supporters of TTIP needed a comprehensive endorsement from the European Parliament in order to keep up pressure on domestic governments to ratify the treaty once it is completed. With scepticism towards TTIP amongst the governing parties in France and Germany and the (pro-TTIP) Conservative party governing with a slim (and increasingly eurosceptic) majority in the UK, the ratification process is unlikely to be smooth. If any of Europe’s three largest economies fail to ratify TTIP, it is difficult to see how the treaty would survive.

Although unlikely to prevent the European Parliament’s eventual approval of TTIP, the events that surrounded this vote mark a change in the political tide. Despite starting as a preoccupation of the fringes, the anti-TTIP movement has become a serious force in European politics. It has united MEPs from both the left and right and, for the first time ever, subjected a trade treaty to something approaching democratic scrutiny. Most significantly, it may yet lead to an ultimate rejection of TTIP by the EU’s member states.