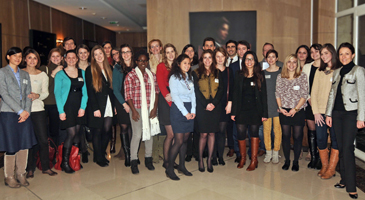 January 2014 has seen the highest intake yet for the LLM in Paris, which launched just 18 months ago. 50 students of more than 30 nationalities are now enrolled on the programme.

The first term of 2014 began with an opening lecture by Professor Rosa Lastra who posed the question: “Banking Union in Europe: will it solve the next crisis?”. Addressing a room packed with students and friends of the programme, Professor Lastra provided a clear and thorough picture of the issues and challenges at stake when considering banking union in Europe and the quest for financial stability.

Hosted by the Paris office of Cleary Gottlieb Steen and Hamilton LLP, as represented by the firm’s Partner Barthélemy Faye, the lecture was followed by a lively reception where new students had the chance to meet and mingle with students who joined in the first two intakes of the programme from 2013.

The LLM in Paris is an innovative graduate degree programme developed by experienced academics from the Centre for Commercial Law Studies (CCLS) at Queen Mary University of London. Taught in Paris, it provides students with an in-depth immersion in commercial law from both comparative and international law perspectives, within a common law framework. Read more about the LLM in Paris programme.