In the first of a series of collaborative projects between the criminal justice centres of Renmin University and Queen Mary, University of London, a joint conference on Policy and Criminal Justice: How to meet the challenges of organized crime in the context of globalization was held in Beijing on 25-26 October. 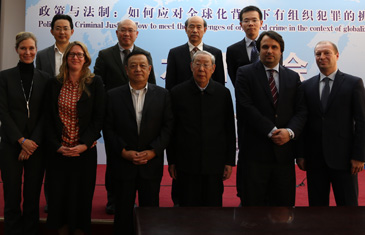 Eminent scholars from several Chinese universities made presentations and participated in lively discussions on the extent and nature of organized crime as well as on the policy of crime prevention.

Professor Valsamis Mitsilegas, Director of the Criminal Justice Centre at Queen Mary, discussed definitional aspects of the concept of organized crime in his talk Legislating against organist crime: European, comparative and global perspectives. Professor Mitsilegas’s presentation was based on a study he prepared for the European Parliament 'The Council Framework Decision on the Fight against Organised Crime 'What can be done to strengthen EU Legislation in the field?'.

Amber Marks’s talk ‘Evidence Based Policy in Organised Crime’ presented the latest research on the impact of drug laws in the new era of designer drugs (for an introduction to the changing drug landscape see BBC Radio 4 File on 4 -Tues 29 October).

Dr Saksia Hufnagel outlined the similarities and differences between the collaborative arrangements in China and Europe in her talk Police Cooperation and Organised Crime: Comparative Perspectives from Europe and China.

Professor Valsamis Mitsilegas said: “It was a fascinating experience. I am very much looking forward to the fruits of future research collaboration.”