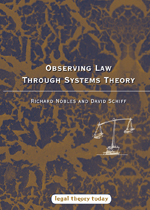 The book uses Niklas Luhmann's systems theory to explore how the legal system operates as one of modern society's subsystems. Professor Nobles and Professor Schiff demonstrate how this theory alters our understanding of some of the most important and controversial issues within law: the nature of judicial communication and legal argument; the claim that it can be right to disobey law; the character of legal pluralism and globalisation; time and its construction within law; the significance of the rule of law and human rights and the role of appeals to, and within, law.

Systems theory enables the authors to demonstrate how the legal system observes its own operations through its own communications, and how this contrasts with the manner in which law is observed by other systems such as the media and politics.

In this context the authors explore the constraints imposed by systems, in particular the legal system, upon the individuals who participate in them.