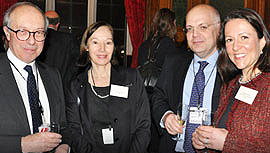 A new LLM programme recently launched in Paris by Queen Mary, University of London, has been awarded the 2013 Franco-British Lawyers' Society (FBLS) Prize.

The prestigious award recognises significant contributions to Franco-British legal relations. Dr Maxi Scherer, Director of the Queen Mary Paris LLM, received the award from Lord Hope of Craighead, Deputy President of the Supreme Court, at a ceremony at the House of Lords on 28 January 2013.

Lord Hope said that the Paris LLM, run by the Queen Mary’s Centre for Commercial Law Studies (CCLS), was an exciting programme and precisely the type of project the Society wished to promote in order to give the opportunity to French and British lawyers to work and study alongside each other.

Dr Maxi Scherer said: "I am very honoured to receive this prize and we are delighted that the programme has received such a great distinction, honour and encouragement, especially as we have only recently launched the programme.”

Launched at the start of January 2013, the Paris LLM is an innovative programme which is taught in English by Queen Mary academics, visiting lecturers from leading French law firms and other prestigious schools and universities.

Professor Spyros Maniatis, Director of CCLS, added: “In developing the programme, we have placed great emphasis on working closely with our French partners and this award recognises CCLS’s international and comparative approach and commitment to further cultivate our continental links.”

Read more about the Queen Mary LLM in Paris programme or the Franco-British Law Society.