The Centre for European and International Legal Affairs (CEILA) and The School of Law are delighted to welcome His Excellency Judge Peter Tomka to the CEILA Annual Lecture at Queen Mary University of London.

A century ago this year, a committee of ten distinguished jurists from around the world gathered in The Hague. Their task: to prepare plans for the establishment of a World Court, with the jurisdiction to decide disputes between States on the basis of international law. The fruits of their labours live on today, and the International Court of Justice is at a historical high in its caseload. In this lecture, Judge Peter Tomka, senior Member and former President of the World Court, will reflect on the development of the Court, how it gained the confidence of the international community while making substantial contributions to international law and the challenges it faces in an era of increased uncertainty and change. 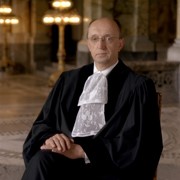 Judge Peter Tomka has been a Member of the International Court of Justice since 6 February 2003. He served as its President between 2012 and 2015, having held previously the Office of Vice-President between 2009 and 2012. Prior to his election to the ICJ he was Member of the International Law Commission (1999‑2002). He acted as Agent of Slovakia before the ICJ in the Gabčíkovo‑Nagymaros Project (Hungary/Slovakia) case. In 1997 he chaired the Sixth (Legal) Committee of the General Assembly and from 2001‑2002 he was Chairman of the ad hoc Committee of Legal Advisors on Public International Law (CADHI) in the Council of Europe.

He is a Member of the Curatorium of the Hague Academy of International Law. Since 1994 he has been a Member of the Permanent Court of Arbitration and sat as Arbitrator in the Iron Rhine (Belgium/Netherlands) case and in the Indus Waters Kishenganga (Pakistan v. India) case. He is on the list of Arbitrators under Annex VII of UNCLOS and on the panel of Arbitrators maintained by ICSID; he has acted as President or Member of several arbitral tribunals and ad hoc annulment committees. He is an Associate Member of the Institut de droit international and a Honorary Bencher of the Middle Temple.