The then Bailiff nominated me [for an OBE] in 2017, not wanting it to appear as a retirement gift. I got it at the Palace from HM the Queen, in a very pleasant ceremony. There are not many spaces on the Channel Island list, so I was fortunate. It is a comfort to me that Anne was able to watch a DVD of the investiture and Tom also attended in person. The arrangements are excellent, you and your guests are made most welcome and put at your ease. It is not an occasion to have your trousers fall down! The only big regret is that neither of my parents were alive to see it. 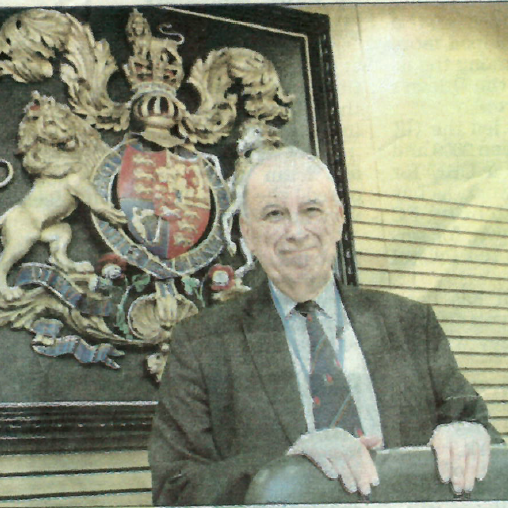 Overview of Career and what I am doing now

I graduated in 1971. We were a small year – not long after the Department was founded. I did not work hard enough but got through. My background was working-class, both my parents left school at 14; my father, a couple of years later, ran off and joined the Guards. My mother went from rural Hampshire to go into “service” in Scotland earning £26 per year. They both supported me fully in my education. Luckily I went to an excellent Church of England Primary School and then to one of Portsmouth’s State Grammar Schools (now a 6th Form College). After QMC (as it then was) there was 6 months’ extremely arduous grind at the College of Law for the Law Society’s Part II. We sat our papers in Alexandra Palace, wearing coats, as it was so cold in February, and the pigeons were flying around. It was my wish to be a court-room advocate, but this would have needed support from my family, who did not have much money. So, I decided to become a solicitor and got Articles very easily at Fareham and Gosport Magistrates’ Courts (both closed now) under a tough, able and plain-speaking clerk to the Justices, who had worked his way up. Then I got a job, after qualifying, at the Aylesbury Group of Magistrates’ Courts as the Principal Assistant. The background knowledge gained and training were absolutely invaluable.

I miss the halls at South Woodford and paid a nostalgic visit back there on the Central Line to look at the flats put-up in their place. The thing to note is that life was easier for prospective law students in the 70’s. My friend Tony Roost, with whom I am still in touch (and to whom I introduced the lady he married) and I, won the Hinde Mooring Prize in 1971. But I still wish I’d worked harder but too late now!

In 1979 I went into a Civil Service competition for legal posts in the Department of the Director of Public Prosecutions. I got in and spent happy years in what was then a close-knit group of lawyers and support staff, (we still have annual re-unions) that by law had to deal with all the serious offences over England and Wales. Counting-up later, I noted I had dealt with 50 or so muders, plus numerous serious sexual offences and, by law, criminal allegations against the Police. This was good stuff, and I still recognize towns and cities by remembering if I’d won (or lost) a case there in those days.

In 1986 the CPS came in. It was brought in too early and, although I was promoted into the first London Branch (my Team, which I ran, covering the old East End, Holborn and King’s Cross), I never had more than 50% of the lawyers needed. It was also bureaucratic and generally unsatisfying.

In 1988, I got a job with the Law Officers of the Crown in Guernsey. I knew the place, having spent a number of holidays there playing in the Guernsey International Chess Tournament. Initially, though the first full-time crime specialist, my work was advising and drafting. You need to re-qualify as an Advocate of the Royal Court, which involved six months at Caen University (where you were examined in five subjects by vivas, with the French students) and a Guernsey Bar exam. In those days there was also a 5-year residence requirement (now only 2). Nowadays the Caen element has been shortened and the French language aspect pruned. In 1994 I was appointed a Crown Advocate, and in 1997 the Stipendary Magistrate and Coroner. The latter, an unfamiliar task, necessitated training, as there are full-timers in England, but not enough work for one in Guernsey. Advocates robed as English Junior Barristers but had a French toque instead of a wig. The Common Law of Guernsey is based on an ancient custom of Normandy. I was the only full-timer (now we have two) and not only did crime, but civil actions and family cases. In 2005 a new post: Judge pf the Royal Court, was created and I was appointed. It is closely linked to the English Circuit Judge position. My work-load expanded to trials on indictment (drugs, which are more expensive in an Island, sex cases, serious assaults, plus all sorts of civil cases and divorce – normally dealing with the matrimonial property and custody of children). In 2020, having reached the age of 70, I retired, but was immediately sworn-in as a part-time Lieutenant Bailiff (the Chief Judge is called the Bailiff) and sit pretty regularly in all sorts of cases, including helping-out in the Magistrate’s Court.

My wife, Anne, was my optometrist. She examined my eyes and we ended up together. She was a young widow, Guernsey-born with a small child. She developed progressive MS, had to retire and eventually was bed-bound, dying suddenly in May 2020. My step-son Tom works in England, as a crime-scene scientist. I was able to bring my parents over; Anne having found a house with a wing, where I still live. They had a comfortable life and were well looked-after before they passed away. I have old friends in the UK, but very little family, and I am happy staying in Guernsey where I have been for 33 years. 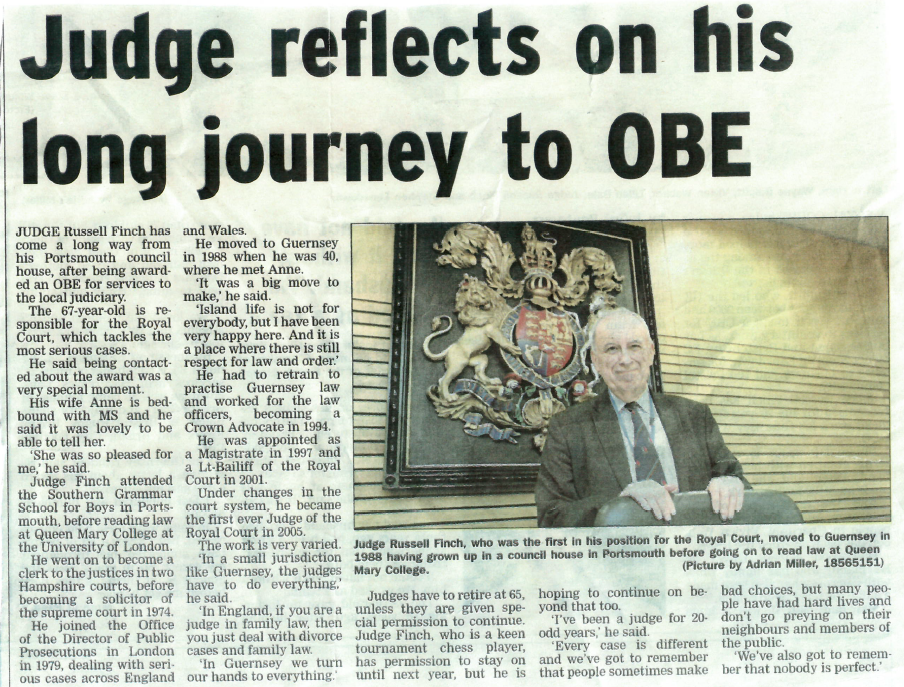 The then Bailiff nominated me in 2017, not wanting it to appear as a retirement gift. I got it at the Palace from HM the Queen, in a very pleasant ceremony. There are not many spaces on the Channel Island list, so I was fortunate. It is a comfort to me that Anne was able to watch a DVD of the investiture and Tom also attended in person. The arrangements are excellent, you and your guests are made most welcome and put at your ease. It is not an occasion to have your trousers fall down! The only big regret is that neither of my parents were alive to see it.

It was a pretty close-knit year. We all knew each other. There was a re-union in 2018 and several of us made it – some I’d not seen for nearly 50 years. We had high-power teachers: Tony Grabiner, now Lord Grabiner QC, Tony Hughes, later a Supreme Court Justice, John Mesher, later Social Security Commissioner, and others. Law students then, tended to be very much a middle-class group. I miss the halls at South Woodford and paid a nostalgic visit back there on the Central Line to look at the flats put-up in their place. The thing to note is that life was easier for prospective law students in the 70’s. My friend Tony Roost, with whom I am still in touch (and to whom I introduced the lady he married) and I, won the Hinde Mooring Prize in 1971. But I still wish I’d worked harder but too late now! My best school subject was history, and I did the “S” level. The Headmaster wanted me to go to his old Oxford College, but I saw a prospective life as a history teacher unfolding. Over the years I resumed studying it, and eventually got a Master’s from Sheffield Hallam, via distance learning.

Piece of advice that changed my perspective

Interestingly enough, this had to wait until I had retired! It would have been helpful earlier. “If you are constantly hankering after what you have not got and envious of others, you will be the most miserable person alive; if you are content with your achievements, what you have got, you will be the happiest person alive.” Other advice received over the years was of a more practical and work-related nature, e.g., keep cross-examination to a minimum, get through your list of cases at all costs, don’t give decisions with the Court of Appeal in mind, but as you see things, etc etc. All useful, but not as sweeping as the first advice I have cited

Unfortunately, this is rather a depressing section to write, but you have to deal with things as they are, not as you would like them to be.

First of all, it would be much more difficult, if not impossible, for me to start now rather than in 1968. Grants have gone, the legal profession has become more difficult to get into, and many things have become worse. If you are able to qualify (and I leave out the problems of training contracts/pupillage) and do criminal law, you will find yourself working long hours for not much money. I strongly, and I mean strongly, recommend two books by the Secret Barrister: the first one under that name as a title, and the successor “Fake Law”. From my knowledge of the situation in England, they are absolutely correct. The Criminal Bar keeps you at it for a 70-hour week (if lucky) for less than the minimum wage, legal aid restrictions have led to big firms taking on cases and hammering them out like a factory, etc. The Police have lost 44,000 officers. Courts have been closed. The CPS has lost a good deal of funding, and so on. It is a national disgrace that a complainant in a rape case and an accused (who may be not guilty) wait 2 years for a hearing. The amount of obfuscation and ignorance from politicians is shocking.

The very good, top 1% or so, will get through. Personally, doing commercial/family/financial/property law does not appeal to me. The public does not realise that the large majority of lawyers never attend court, it is only the low-lives like me!

I am sorry to sound so pessimistic, but I feel for the numerous perfectly good candidates who cannot get a training contract or pupillage. As things are, I can only offer my very best wishes. One symptom of the malaise is that here in Guernsey there are still good prospects, the young lawyers coming in from the UK, Australia, South Africa, etc are very good and have a chance to make a career. I have always been in one form of public service or another, and never hankered for private practice; perhaps this is a defect of character, but even that career path is now much harder.

This profile was conducted by Alumni Engagement Coordinator, Hannah Dormor. If you would like to get in touch with Russell or engage him in your work, please contact Hannah at h.dormor@qmul.ac.uk.