Ethan is an entrepreneur who launched ProGrad with fellow Queen Mary alumnus Marco Logiudice (Economics, Finance and Management BSc, 2019) in 2021. Their aim is to make credit accessible and easy to understand for young people and students. 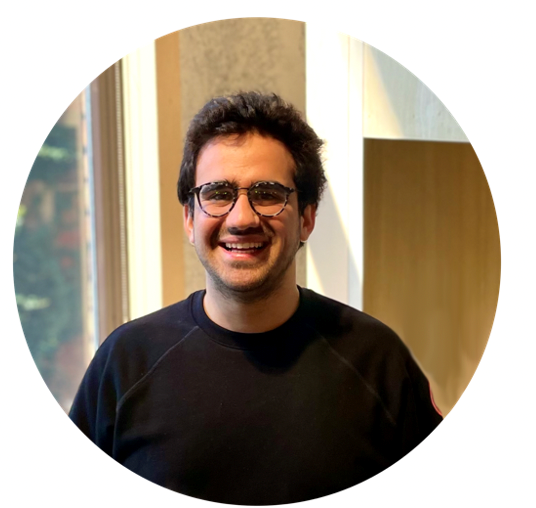 I’ve always been really passionate about Law and Politics, mainly about Law while growing up. I initially wanted to study in the US, where my brother studied. As I grew older, I understood that getting a Law degree in the US would take me about seven years with college and then Law school. So I decided to come to London, with this passion for trying to help people, trying to become a lawyer one day and being able to really help people who are going through problems.

The reasons why I chose to study at Queen Mary were that it had an amazing reputation as a Law school – one of the leading Law schools in the country – and it was really important for me to be in London. I wanted to be able to network with lawyers and to understand how the city was vibrating with all of the good things inside the city.

Every journey is unique and that's something that I didn't quite get. Everyone tells you their advice is going to be the thing that stops you making all those mistakes that everyone else is making...you're bound made those mistakes and just have to get used to that, and be happy about it, and learn from it. How quickly can you bounce back from that mistake?

How did you find the transition to studying and living in London?

I'm originally from Belgium born and grew up in Belgium. I moved to Israel for about a year and a half, to two years and then came to London to do my undergraduate studies.

The transition was not as easy as I had initially expected, to be honest. Initially I was really struggling, to understand what the teachers wanted from me. I was struggling to do my homework and all of those things. It took me a bit of time to really adapt to the different mentality and to living on campus, where I lived in my first year. All of this required a lot of effort on my end that I was not really used to before, as I had come from living at home. So it was a lot of adapting to a new environment and to making new friends. I also had to adapt to living in a new, massive city, which was tricky especially coming from Belgium which is so much smaller than London. But eventually I really enjoyed it!

Could you tell me a bit about ProGrad and what inspired you to start it?

The genesis behind ProGrad was when Marco and I were both of studying at Queen Mary during our undergraduate degrees. We were trying to work out how to fund our postgraduate studies. Marco went on to a Masters at Cambridge, and I went to UCL. Both of us had this issue where we couldn't really find the funding that we needed to fund Masters degrees at a sustainable rate. On top of this, it was really unclear to us what the implications were of taking on credit. We basically agreed that this should not be how it works for young people, not just students, but the wider Gen Z customers so we decided to start ProGrad to make it more understandable.

We wanted to help young people understand about credit, what an APR is, what an interest rate means, and all of those other terms which a lot of people don’t understand, especially when you're quite young.  The idea is to try and help them along that financial journey from a student all the way to buying their first house etc.

We’ve been really actively focusing on it for around a year and it’s been going quite well. We’re just now going through one of the leading tech accelerators in the world. We raised money and are launching very soon and we have a lot of our lenders and partners on board. So we'll be launching about 25 to 30 lenders on our panel, so that's very exciting. I've been getting a lot of good feedback both from end customers and from our clients. So we are just so excited to launch in the next few weeks.

What's the next step?

Initially we are going to be launching in about a months’ time with a selected number of customers, to really test the platform from an end to end point of view, to understand how the journey is, and to try and get some feedback from those early customers to understand what's going well, what's not going well. There’s probably going to be a few weeks of tweaking a few things on our end and then eventually having a fully-fledged launch around the end of May time. Eventually we want to try and offer more and more products that are relevant for Gen Z customers and continue to really scale massively.

Is there any advice that you wish you'd receive before you started ProGrad?
Every journey is unique and that's something that I didn't quite get. Everyone tells you their advice is going to be the thing that stops you making all those mistakes that everyone else is making. Of course some mistakes can be avoided but you're pretty much bound to make some mistakes. To be honest, if you didn't make any mistakes, you’re probably not going to find it as fun and as exciting and challenging. So you're bound made those mistakes and just have to get used to that, and be happy about it, and learn from it. How quickly can you bounce back from that mistake? How quickly can you take a decision – even a drastic one. Just keep going until you get it right.

Do you have any particularly kind of fond memories of your time at Queen Mary?

I think one of the great memories was when I met Marco and another friend. Both of us were queuing up for Drapers, for the bar at Queen Mary. Marco and my other friend, Jordi tapped on my shoulder, and said “Hey, nice to meet you”. This was literally the first day that I had arrived at Queen Mary, in Freshers Week. And we hit it off from there and increasingly became better friends until we decided to co-found ProGrad.

All in all I had an amazing time at Queen Mary, I met some of the most amazing friends and teachers, and I learned a lot.

This profile was conducted by Alumni Engagement Coordinator, Hannah Dormor. If you would like to get in touch with Ethan or engage him in your work, please contact Hannah at h.dormor@qmul.ac.uk.