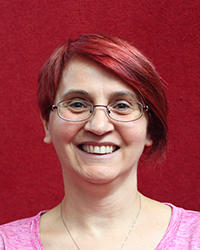 Work experience: In 2001 Dr Maffucci moved to London and joined Dr Marco Falasca's laboratory at University College London working on cell signalling, specifically involving the family of enzymes: phosphoinositide 3-kinases. She worked as a research fellow under Dr Falasca’s supervision for four years, the last three of which were supported by a Diabetes UK Project Grant to Dr Falasca (Apr 2002-March 2005). She was then awarded with a Diabetes UK RD Lawrence Fellowship (personal fellowship, started on Apr 2005). In 2007 she was appointed as a Lecturer in Cell Signalling at the Centre for Diabetes within the Blizard Institute, and in October 2011 was promoted to Senior Lecturer in Cell Signalling.

Dr Tania Maffucci and her colleagues undertake research intended to understand how specific human diseases develop and progress by investigating the cellular mechanisms underlying them. Her research investigates some of the complex events generally indicated as “signal transduction”, the cellular signals that regulate the normal functions of a cell and whose deregulation is responsible for altered cellular functions, ultimately leading to disease.

Eight isoforms of PI3Ks exist and they are grouped into three classes, according to their structure and intracellular functions. Most of the research in the PI3K field has been so far focussed on members of the class I subfamily.

Dr Maffucci’s work is currently mainly focussed on unveiling the intracellular functions and potential involvement in human diseases of one specific isoform belonging to the class II subfamily of PI3Ks.

Dr Maffucci’s research is focussed on understanding the intracellular signals that control the normal functions of the cell and how and why they become deregulated in specific human diseases, including diabetes and cancer. Her main projects are focussed on investigating the molecular mechanisms responsible for development of insulin resistance and pancreatic beta cell dysfunction, the two main features of Type 2 Diabetes. Other projects investigate the deregulation of cellular signalling in some types of cancer. She is currently developing an increasing interest in investigating the link between obesity, diabetes and cancer.