I think there is still a way to go for equality, and we cannot be complacent. What can we do to further it now? 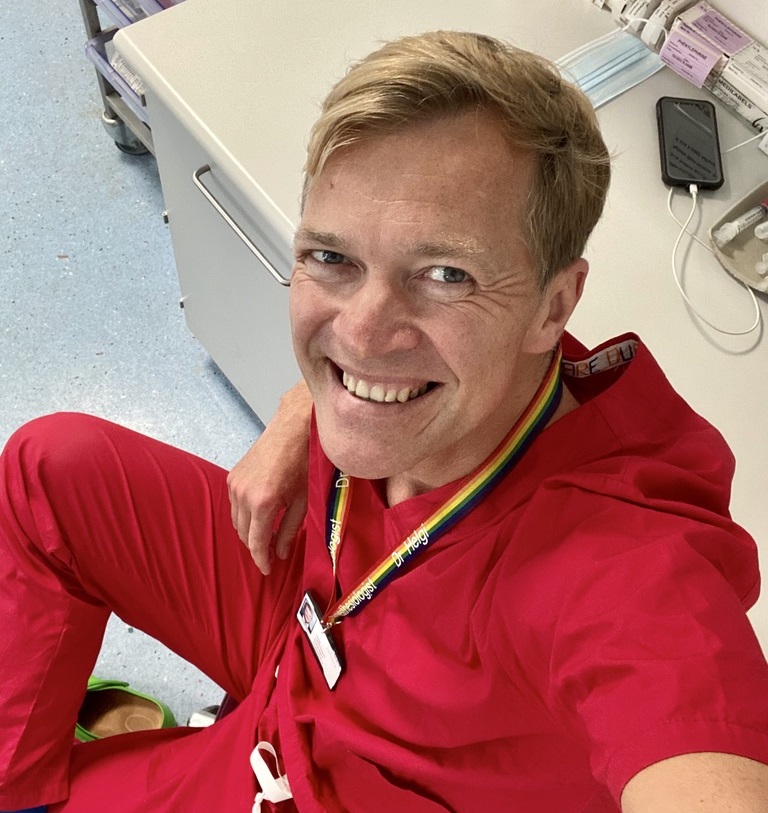 Dr Helgi Johannsson qualified in Medicine in 1996 and is now a consultant anaesthetist and clinical director of theatres and anaesthetics at Imperial College London. In his profile he shares his personal experiences, and thoughts on what can be done to achieve better LGBTQ+ representation and to move towards equality.

"I applied to Barts in 1989 and started as a naïve eighteen year old in September, 1990. I had four offers, but I chose Barts because I really got a sense of friendliness and informality from the interview. The new course at the time with a greater emphasis on relevant clinical subjects also helped. There was a student on my interview panel, a respiratory physician called John Moore-Gillon, who I still remember as being really friendly. These impressions matter and all in all made me choose Barts.

All the Barts students were together in College Hall (now Dawson Hall), in Charterhouse square, and I was in room 103 with a really nice view over the green. I had gone to a state school and really did feel the massive step up in learning, but I think the fact that we hadn’t been spoon-fed in the same way as some of the private school educated students helped us, as we were more used to independent study.

At the time there were very few gay role models I identified with, and the AIDS crisis was at its peak, with young men dying in tragic circumstances every day, so any thoughts that I might be gay myself were firmly suppressed.

At the time there were very few gay role models I identified with, and the AIDS crisis was at its peak, with young men dying in tragic circumstances every day, so any thoughts that I might be gay myself were firmly suppressed. I was an active member of the Christian Union, and all their teachings said that being gay was a sin. It was something that applied to other people, not me.

I was also heavily involved in music and drama (although I’ve always been a better singer than an actor, and I’m a terrible dancer). I was a member of the Barts Gilbert and Sullivan society, playing the Mikado in the same production, and Dick Deadeye in HMS Pinafore. The joy of being booed as you enter the stage as the baddie is indescribable. I also took part in various choir performances and joined the University of London Union chorus, then the London Philharmonic choir to do some proper serious singing.

What I really loved about the atmosphere at Barts and I imagine the London as well, although we were quite separate in the early and mid-nineties, was how the small size of medical school (100 per year) meant there was a lot of interaction with consultants and senior nursing staff, and we felt part of the family. It is so important that students interact with consultants not just in a professional way, but in a social way too, and as such I take an active interest in the Imperial Light Opera Society. Medicine isn’t just a job, it’s a way of life. Students keep us oldies up to date, and hopefully we oldies provide role models and guidance to the youngsters.

I didn’t really realise I was gay until a few years into my marriage to a student three years above me at medical school, so 1998 proved to be a pretty traumatic year. I didn’t tell anyone at work that we had divorced for about three months, and my circle of friends changed almost completely, as most of my Christian friends broke contact (with a few notable and very wonderful exceptions, you know who you are). I was a medical SHO at the time at Homerton, and it was around then that Paul and I were having coffee at Old Compton Café, and heard a loud bang just down the road, as the Admiral Duncan was blown up. I rushed to the scene and was one of the first doctors there, but felt very out of my depth. I had already been thinking about doing anaesthesia, but that experience really made me want to improve my acute care skills and I made up my mind to change over.

I always thought anaesthesia was a very welcoming specialty to LGBTQ+ people and that is still definitely borne out in my own hospital and very diverse department. Every day I’m blown away by how accepted we are and how no one bats an eyelid when I refer to my husband. I am generally a very open person, having decided in 1998 to be honest with myself and then eventually with everyone else, and my job wouldn’t be anywhere near as fulfilling if I couldn’t be myself at work. It shows how important and interlinked physical, mental and spiritual health are, hence the excellent theme of Body, Mind, Spirit this year.

I think there is still a way to go for equality, and we cannot be complacent. What can we do to further it now? I think it’s mainly about role modelling to be honest. People being open about their sexuality at work, but also about representations of different lifestyles in the medical school curriculum. Surely as a case history of an Indian-origin person shouldn’t be used solely for tuberculosis, one of a gay man shouldn’t always indicate HIV infection or other STI? My husband has hypertension just like many other men in their fifties, and having case histories of as they are in the general practice clinic.

Finally, although being gay today is so much easier than it was in the nineties, coming out is still a big deal, and often happens when you’re at university. As the American campaign says, “it gets better” and it really does as you get to know yourself better. Although I wouldn’t mind being transplanted into my 25 year old body, I definitely wouldn’t want to go back to my 25 year old mind. I know myself so much better now. Do enjoy your youth though, and remember never to take your freedoms for granted. Cherish them every day and fight for them.

Have a wonderful month!"

This profile was conducted by Alumni Engagement Officer, Sara Gazi. If you would like to get in touch with Dr Johannsson or engage him in your work, please contact Sara at s.gazi@qmul.ac.uk.