There have been people in every society and every period of history whose experiences of gender identity and sexual desire aren’t contained by the fixed categories our culture thinks of as ‘straight’ and ‘cisgender’. Queerness is a normal, natural and consistent part of human life. Acknowledging, celebrating and learning from that would benefit everybody in society. 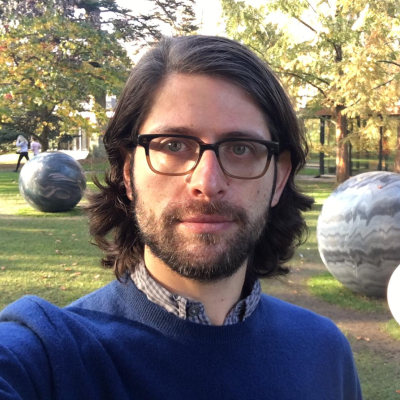 Can you describe your career path to date and touch on your current role?

I’ve been privileged to have a somewhat unconventional career path involving work I find rewarding, stimulating and worthwhile. I started as an arts journalist, writing mostly about film and TV, leading to writing books and programming film seasons. Then, after a couple of years in New York, I got the chance to cover London’s underground performance scene as Time Out cabaret editor. This led to related opportunities in programming, documentary filmmaking, blogging and producing and hosting live shows.

With many of London’s LGBTQ+ grassroots venues under threat, I contributed to efforts to defend and celebrate them, including writing the successful application to make the Royal Vauxhall Tavern the UK’s first queer listed building. I then undertook doctoral research at Queen Mary with queer performance collective, Duckie. Since 1995, they’ve been doing clubs and nightlife performance events but they’ve also done community projects – training schemes for young LGBTQ+ performers, afternoon cabaret teas for older people without many friends or family, and drop-in art sessions in homeless hostels. The research was about how collaborative arts projects can create better worlds by operating as ‘homemade mutant hope machines’ – forms and processes that emerge from lived experience, operate relatively autonomously, adapt to changing conditions and routinely generate hope in the possibility of better worlds for marginalised people, by bringing those worlds into being a bit at a time. The research focused on these and how they generate new kinds of empathy, confidence, creativity and collective action. Since then, as ‘Dr Duckie’, I’ve adapted this research into talks, workshops and online resources for general audiences (as well as publishing academic articles, though I’m not pursuing an academic career as such).

The pandemic has thrown a lot of things into uncertainty so I’d say my current role is a bit blurry! Though I’m working on a couple of ideas…

More and better media representation is particularly important for queer children and young people to see they are not alone or unusual. But true liberation for LGBTQ+ people – and everyone else – will require the development of new structures, institutions and social forms that move away from prioritising individualism and growth and move toward solidarity and sustainability.

Without doubt, my inspirational PhD supervisor Catherine Silverstone. Catherine instigated the project, securing funding for someone to research Duckie; she helped me frame the critical contexts and research methodologies; and she offered tireless, robust and pragmatic critiques of the ongoing work. She also offered invaluable guidance on other aspects of academic practice, such as teaching and publication. Most importantly, she was deeply attentive, caring, empathetic and supportive. Catherine passed away last year and I am deeply grateful to have been one of her last PhD students.

What advice would you give to students interested in studying for a PhD?

Honestly, I have mixed feelings about the whole process. It is certainly a privilege to do sustained research into a subject you consider interesting and important and to connect with passionate, stimulating and supportive people in your field. It was brilliant to be immersed in the incredible work that Duckie does, and to exponentially expand my critical understandings of related subjects. But PhD study can also be intensely isolating, stressful and overwhelming, not to mention financially challenging. In the wider context, there are serious issues within the academic sector to consider. As an arts researcher not planning on an academic career, I think I fell through the cracks somewhat in terms of institutional guidance. Yet for those who are pursuing an academic career, the landscape is tough, especially in the humanities, with secure job opportunities thin on the ground and often exploitative conditions associated with teaching and publication. And of course, the pandemic has hugely increased sector-wide uncertainty. So, my practical advice would be to try to speak to several people with current or recent experience in the field and/or department where you’re considering applying to make as informed a decision as possible.

How do you think COVID and government responses such as lockdown has impacted the entertainment industry, both in general and the LGBTQ+ community specifically? What do you think the effects are in both the short and long term?

The lack of clarity and support from the government throughout the pandemic has had devastating effects on our whole society, especially those already vulnerable to exclusion, inequality and injustice. The arts and entertainment sectors are particularly at risk for multiple reasons. Some are formal (you can’t do in-person live performance or clubbing remotely – although there have been some impressive digital experiments) and some structural. Arts workers, queer people and young people were disproportionately vulnerable to precarity, exploitation and mental ill health before the pandemic, so a sector to which such people are central faces existential challenges. The short-term risks include people dying, getting physically or mentally ill, losing their homes or jobs, leaving the sector or the country or both. Many companies, venues and organisations are struggling to survive. Longer-term risks include further stagnation of incomes and conditions; reduced capacity, diversity and risk-taking for surviving organisations; increasing government hostility to arts and artists; and the negative impact of Brexit too. On the other hand, such challenges have increased awareness of the importance of collective support and solidarity so there is hope that these will be more central to the sector going forward.

How has Duckie had to adapt to the lockdown?

It’s been very tough for Duckie, as it has been for all nightlife, arts and community organisations. Of course, their regular Saturday nights at the Vauxhall Tavern are on hold for now and probably quite some time to come. It’s also been tough for their community projects, though they’ve put tremendous efforts into adapting The Posh Club, their afternoon cabaret event for older people. They’ve managed to put on small, safe performances in care-home gardens and at people’s front doors, send fun care packages through the post, and connect people through bespoke newspapers and online shows.

Your work has spanned an array of specialisms from cabaret to film and has often focused on LGBTQ+ issues. Did you choose to pursue this as an area of interest in your work and studies or was it more of an organic process?

I’d say the focus on LGBTQ+ issues organically emerged over my time as a film journalist and became central around the time I was living in New York (2007-2009). This was cemented in my role as cabaret critic since queer bodies, identities and forms are so central to that world. Describing and championing this scene felt like it had more direct civic value than my earlier work and this was amplified when queer venues came under threat and I felt a responsibility to try to help. I think I’ve used many of the same critical and expressive skills across my career but gradually shifted from reviewing blockbusters and reality TV shows to championing the power of queer hope. That wasn’t planned!

There have been people in every society and every period of history whose experiences of gender identity and sexual desire aren’t contained by the fixed categories our culture thinks of as ‘straight’ and ‘cisgender’. Queerness is a normal, natural and consistent part of human life. Acknowledging, celebrating and learning from that would benefit everybody in society. Yet queer experience and accomplishments are still routinely erased and belittled and so many LGBTQ+ people still face so many barriers to acceptance – let alone liberation – including exclusion, violence and ill health. Young LGBTQ+ people remain at high risk of tremendous stigma and shame, with lifelong consequences. At the moment, the level of mainstream transphobia in the UK in particular is a national shame and disgrace. LGBTQ+ History Month is a chance both to affirm and learn from the presence of queers throughout time, and a reminder that we have nothing to be complacent about in terms of present conditions.

Equality and representation are important as they signify fairer access to the structures and institutions of power that shape society as we know it. More and better media representation is particularly important for queer children and young people to see they are not alone or unusual. But true liberation for LGBTQ+ people – and everyone else – will require the development of new structures, institutions and social forms that move away from prioritising individualism and growth and move toward solidarity and sustainability.

This profile was conducted by Alumni Engagement Coordinator, Nathalie Grey. If you would like to get in touch with Ben or engage him in your work, please contact Nathalie at n.grey@qmul.ac.uk.