I’ve always loved writing. Whether it was essays at university, the features when I was a journalist, or copywriting for PR, writing has always been the most enjoyable part of any work. 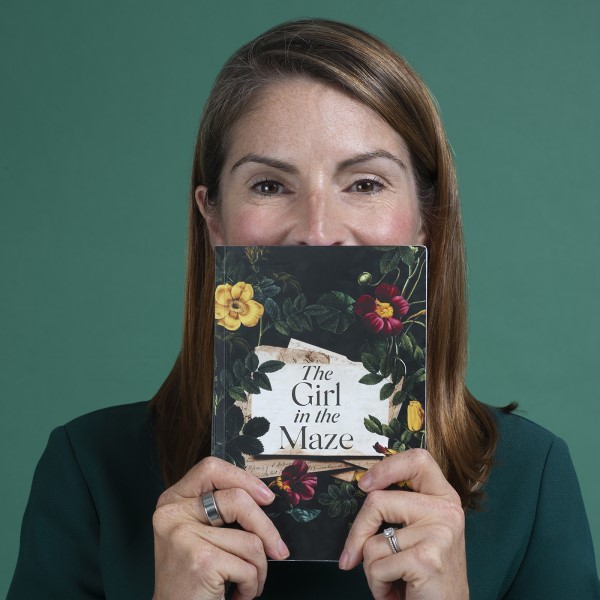 Why did you choose to study English and History at Queen Mary and what did you enjoy most about your degree and your experience at Queen Mary?

English and History were always my favourite subjects at school, so it made sense to continue them at university. I chose Queen Mary because Professor Peter Hennessy was one of the tutors for the modules I wanted to study. At the time, I had ambitions to be a journalist; he was ex-Times and ex-Financial Times and had made the switch into academia. I thought he’d have a fantastic insight into modern political history and I wasn’t wrong. Not only did he bring in amazing guest speakers – such as Michael White – but he also had contacts across Whitehall which enabled us to tour Number Ten and the Cabinet Office, for example. These were some of my highlights of my time there.

I’ve been tinkering around with novels since I was in my early twenties but never seemed to have the time or the impetus to finish them. When I turned 40, I knew it was now or never.

What historical period do you find most interesting and why?

I’ve always been fascinated by the Great War and one of the modules I studied at Queen Mary was on Great War literature – some of the most beautiful poems emerged from one of the deadliest conflicts in living memory. I was fortunate that, as a journalist, I visited some of the Commonwealth War Graves in France and I then followed that up with a longer tour a few years ago. This inspired my second novel, The Fortune Teller’s Promise (out November 2022), which is written from the point of view of Rosie, an undergraduate returning home from university to finish her dissertation on the Great War. Her mother suggests she talks to her great-grandmother, Edith, who just about remembers the war. Rosie reluctantly visits the old lady but is quickly drawn in by her vivid recollections of the start of the war and her father and brothers joining up to fight. But when Edith repeatedly slips up on dates and locations, Rosie starts to wonder whether her memory is beginning to fail her, or if their family history is not what it seems.

What was your experience like after graduating from Queen Mary? Did you find interesting work straight away or was it more of a journey?

I was very fortunate that after a few months temping as a secretary, I secured an Editorial Assistant position in a magazine publishing company. It was just the start I needed, and I slowly worked my way into journalism from there.

Can you describe your career to date and what you do now?

Once I had got my toe into the publishing world, I took a master's degree in journalism while at the same time working my way up within the publishing company I worked for. During that time, I edited a variety of trade publications, several of which were so niche they were featured on Have I Got News for You. Then ten years ago, I was looking for a fresh challenge and set up a PR agency – Magenta Associates – specialising in the built environment, which was an area I had been writing about. I grew the agency and now I act as the organisation’s part-time chairman while also writing novels.

Your debut novel, The Girl in the Maze, was recently published by Agora Books. Can you tell us a bit about the book and how you came up with the idea?

I had a very difficult relationship with my mother, Hilda, and for the last four years of her life we didn’t talk at all. After she died in February 2016, I was given the job of clearing out her flat – a sad but strangely comforting thing to do. I didn’t discover anything which helped to explain our difficult relationship, although I wish I had, but it was while I was in that flat in Sutton that the seed for my debut novel was planted. What if I uncovered a secret which explained everything?

I went home and over the following months, the story started to come together. Writing it was a form of therapy in itself. It made me think about my mother in a way that I never had before – with understanding and without blame. Having written the story, I now feel at peace with our relationship which is why the book is dedicated to her.

Traversing four generations of women torn apart by familial trauma, The Girl in the Maze explores the complex relationship and challenges involved in both mothering and being mothered. While sorting through her deceased mother’s effects, Emma Bowen discovers a birth certificate for a child her mother gave birth to as a teenager – a sister she never knew about. The clues her mother left behind lead Emma on a journey from sleepy Sussex to rural Lancashire, and back to 1950s London, where Emma is forced to confront her family’s darkest secrets.

When did you first decide that you wanted to write and how did you set about starting this process? What were some of the rewards and challenges that came with it?

I’ve always loved writing. Whether it was essays at university, the features when I was a journalist, or copywriting for PR, writing has always been the most enjoyable part of any work. I’ve been tinkering around with novels since I was in my early twenties but never seemed to have the time or the impetus to finish them. When I turned 40, I knew it was now or never. I signed up for a two-year, part-time creative writing course in Brighton. My father died shortly before the course started which made me realise just how short life was. In the second term, my mother then died. I quickly realised what I was writing was not a series of separate stories but what became my debut novel. I decided to go part-time at work to enable me to focus on it.

Who are your biggest influences as a writer?

One of the best things about writing is that it gives me permission to read more. I’ve always been an avid reader, but now feel that I should read as much as I can so I can both improve as a writer and also learn more about what’s out there in the written world. Authors I’m enjoying at the moment are Eve Chase, Lisa Jewell and Antony Doerr. But my old favourite go-to authors will always be Iris Murdoch, Margaret Forster, Kazuo Ishiguro, Ian McEwan and Sebastian Faulks.

What are some of the biggest life lessons you’ve learned throughout your career?

Hard work really does pay off. I read somewhere that dedication and discipline beat brilliance and giftedness every day of the week. I know that I’m not the best ever writer, but I have a firm routine which I stick to – I wake at 5am and write until 7.30am, when I get the kids up and get on with life. Sticking to a routine and working hard has helped me write almost three novels so far and hopefully many more to come.

What, in your life as it is now, makes you happy?

One of the best things about writing the book has been hearing how it’s affected other people. Many, many women have got in touch to say that they too had a really difficult relationship with their mother, and they felt vindicated hearing me write about it. It’s also unearthed some family secrets – one lady told me she was speaking to her elderly mother about my book and then her mother, completely out of the blue, revealed that she’d had a baby as a teenager which she’d been forced to give up for adoption.

Can you tell us anything about your next book?

My second book – The Fortune Teller’s Promise – is out this November and is focused on the Great War. My third, which I’m writing at the moment, is set in Brighton and Berwick-upon-Tweed and follows the story of two mothers – Jackie and Grace. Jackie was always told her own mother, Grace, had died in childbirth but, thanks to her father and stepmother, had a happy childhood. But a box of her old baby clothes, given to her when she finally becomes pregnant, holds a secret about Grace that threatens to tear apart her family and make her question what it means to be a mother.

Is there any advice you would give to anyone who wants to write fiction?

Go on a creative writing course. I did a two-year, part-time creative writing course but there are shorter online courses, and even book-based courses, which are easily accessible. It helps to focus your writing, gives you a structure, and really holds your hand along the writing journey. And you meet other writers too as well as great tutors. My writing tutor, Rosie Chard, a published author herself, helped me get The Girl in the Maze ready to send to agents and supported me through the submissions process.

Also create a writing routine: find a time where you feel at your most creative. For me, it’s early morning, but for others it might be during the day or late at night. Finding a writing place can also be helpful in getting those creative juices to flow – it’s as if the writing gods know that when I sit down at this time in this place, I’m there to write.

This profile was conducted by Alumni Engagement Coordinator, Nathalie Grey. If you would like to get in touch with Cathy or engage her in your work, please contact Nathalie at n.grey@qmul.ac.uk.