Could nationalism gain momentum in a post-Angela Merkel Europe?

Germany’s “Defender of Liberal Democracy” - Angel Merkel steps down as Chancellor in 2021 amid various EU elections receiving the nationalist vote, e.g. Poland and Hungary. In Merkel’s absence, could far-right politics gain momentum and have an influence in Europe? 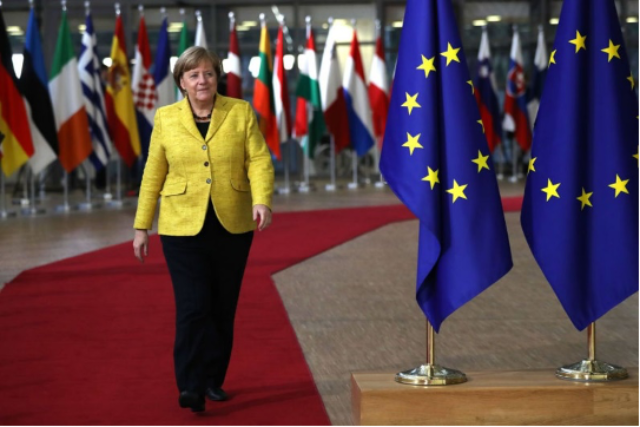 Who is Angela Merkel?

Angela Merkel rose to become one of the most influential leaders of Europe. She was the leader of Germany’s largest party, the Christian Democratic Union (CDU) from 2000 to 2018and has been Chancellor of Germany since 2005 - being re-elected in 2009, 2013 and 2017. This makes her the first female and 3rd longest serving German Chancellor. During this time,she consistently topped the 100 world's most powerful womenlist by Forbes magazine. In 2013, she won one of the most decisive victories in German history, achieving the best resultfor the CDU since the reunification of Germany. In 2014, shebecame the longest-serving incumbent head of government in the EU, earning the title of the EU’s de facto leader. These are just a few of her achievements. Several world leaders have come and gone but Angela Merkel has remained a leading figure in both Germany and the EU. In 2018, it was time for a change. Merkel announced that she would step down as leader of the CDU and would not be running for re-election as Chancellor in 2021.

What has she done for Germany and the EU?

In Germany, after becoming chancellor in 2005, Merkel was successful in organising a coalition between two of Germany’s biggest parties. This included the left Social Democratic Party and the right Christian Social Union, into what became the CDU. From early on, Merkel showed aptitude for establishing consensus, and with the support of the CDU, Merkel went on to reduce Germany’s unemployment and government spending. Both pivotal achievements in stabilising Germany’s economy.

In the EU, the aftermath of the global financial crisis in 2008 hit Europe hard. This brought about the European debt crisis and Greece was hardest affected. Greece was on the verge of bankruptcy and its economic decline brought down the value of the Euro, which affected all Euro members. During this period, Germany’s economy was still going strong compared to fellow EU members, so it came to Merkel to try and rescue Greece with an economic strategy. She proposed that Greece pass spending cuts in exchange for loans from the EU and the IMF, which Europe did not like as it meant Greece would have to cut back on pensions and other services. Nonetheless, Merkel’s priority was to save the Euro, because “If the Euro fails, Europe fails”. Eventually, Merkel managed to build a consensus among theEurozone countries to support her strategy and in turn, reunite the EU. Merkel displayed further aptitude in governance and her popularity increased. She even earned the nickname “Mutti” meaning mother in German. In 2013, she was re-elected to a third term as Chancellor, but she could not have predicted what would come next.

Trouble in the EU and Germany

In 2015, hundreds of refugees fled conflicts in North Africa and the Middle East. Southern Europe especially, faced an humanitarian crisis due to the influx of refugees on their shores. To complicate matters more, several EU nations were reluctant to take in refugees even though Merkel called on them to help. Their reason for reluctance - anti-immigrant views. This time, Merkel could not build a consensus among other EU leaders around accepting refugees, and migrants continued to arrive on Southern Europe’s shores which not only caused a crisis but weakened the togetherness of the EU. Thus, Merkel acted alone. According to Eurostat, in 2015, 148 215 migrants were granted asylum in Germany, significantly more than any other EU country. Thousands of migrants were cheerfully welcomed into Germany. However, on New Year’s Eve 2015 that cheerfulness faded when allegations of mass sexual assault surfaced throughout Germany, with the alleged attackers described as North African and Arab appearance. Knowledge of this ultimately reversed public opinion on immigration as well on Merkel.

What could Merkel’s exit mean for Germany and the EU?

In 2016, The New York Times named Angela Merkel as the “The Liberal West's Last Defender”. Similarly, The Financial times described her as a “Defender of liberal democracy”. With Merkel’s exit approaching, Germany and Europe could see authoritarianism tendencies gain momentum and disrupt the liberal valuesMerkel champions.

In Germany, far-right party called the Alternative for Germany (AfD), which started in 2013 and are known for being anti-EU and anti-immigration, capitalised on the anti-immigrant opinion amongst Germans. This significantly changed voter opinion and voters who initially supported Merkel in 2013 decided to vote for the AfD in 2017. Having lost support for her party in 2018, Merkel decided to step down, though she will still be chancellor until 2021. The AFD are currently the CDU’s biggest opposition party and considering the current climate, could appeal to more Germans with their nationalist standpoint.

In addition to Germany, since the Eurozone and migrant crises other countries in Europe have seen nationalist political parties win more approval in recent elections, e.g. Poland and Hungary. This could be seen to threaten the unity of the EU. With Merkel stepping down, nationalist leaders could disrupt the harmony of the EU going forward - posing even more of a worry for the EU. Nationalism is on the rise in Europe whilst Germany as well as the EU will lose one of its longest serving liberal leaders.

Germany, the EU and Brexit

The UK officially leaves the EU on 31st December 2020. Despite this, Prince Charles maintains that the UK and Germany will “always be allies”. The question lies in whether the UK will leave the EU with or without a deal. If no deal plays out, implications on trade would be more than just a British concern.

After the US, Germany is the UK’s biggest trade partner. According to the Office for National Statistics(ONS), 2019 saw UK trade imports from Germany at £65.3 million and exports at £36.5 million. If no deal Brexit occurs, it is likely that Germany would see losses of circa €10 billion annually and by extension the loss of 750,000 jobs.

The EU itself was the UK’s largest trading partner before Brexit and as of 2018, accounts for 49% of international trade. In 2019, UK exports to the EU were £294 billion (43% of all UK exports) and UK imports from the EU were £374 billion (52% of all UK imports). A hard Brexit would cost the EU €40 billion annually. Also, the UK’s exit means EU contributions will have to be reappropriated and it may fall to Germany to ‘pick up the bill’.

To date, UK - EU trade agreements are ongoing. Remaining negotiations pertain to: fishing rights, licensing and regulation of medicines, the European Court of Justice (ECJ) possessing UK jurisdiction and data sharing and security. Following a no deal, UK and EU trade would be governed by World Trade Organisation (WTO) rules from 1st January 2021.

Germany’s 2017 election saw AfD secure the third-highest share of votes with 12.6%. Established in 2013, AfD utilised the anti-immigration sentiment of 2015 to gain momentum. However, such momentum is waning. The next election is expected to be the 26th September 2021 and Merkel’s CDU are yet to vote on a new leader. Widely seen as successor was Annegret Kramp-Karrenbauer (AKK), until she broke the “unforgivable” rule of collaborating with the AfD, which violated CDU policy and she promptly resigned. The CDU remains a frontrunner in the next election. Although, leadership confusion could see the CDU lose votes to The left or the AfD. For the latter, AKK’s resignation could mean a political win.

In Europe, elections in Poland and Hungary may prove to be the toughest challenges for the EU. 2019 saw Poland’s largest party, Law and Justice (PiS), known for their right-wing populism secure a return to power with 43.6%of the vote. PiS maintaining power and popularity causes tension with the EU because their methods have broken EU laws and they could utilise political control to solidify their undemocratic agenda. Similarly, Hungary elected Viktor Orbán to a 3rd term with 49.3% of votes in 2018. His party Fidesz now have a supermajority. This is likely to clash with the EU as his government pursue nationalist ideologies, such as anti-immigration and media censorship.

Poland and Hungary are creating problems for the EU. Both countries have blocked the EU’s COVID-19 €750 billion recovery package in contest to funds being contingent on respecting the rule of law. Now, it remains to be seen how the EU will proceed. Nationalism seems to be gaining momentum in Europecreating waves the EU would not want to ride.