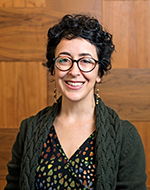 Professor of Law / School of Law

Dr Violeta Moreno-Lax is Senior Lecturer in Law, Founding Director of the Immigration Law programme, and inaugural co-Director and co-founder of the Centre for European and International Legal Affairs at Queen Mary University of London. She is also Visiting Professor at the College of Europe, Fellow of the Centre of European Law of King's College London, EU Asylum Law Coordinator of the Refugee Law Initiative of the University of London, Co-Chair of The Refugee Law Observatory, Co-convener of the Society of Legal Scholars (SLS) Migration Law Section, and member of the Steering Committee of the Migration Law Network. She has previously been a Lecturer in Law at the Universities of Liverpool and Oxford and held visiting positions at the Universities of Macquarie, New South Wales, Oxford, Nijmegen, and The Hague Academy of International Law. She has published widely in the areas of international and European refugee and migration law and regularly consults for the EU institutions and other organisations active in the field.

(with Costello), ‘The Extraterritorial Application of the Charter: From Territoriality to Facticity, the Effectiveness Model’, in Peers et al. (eds), Commentary on the EU Charter of Fundamental Rights (Oxford: Hart Publishing, 2014) 1657-1683.