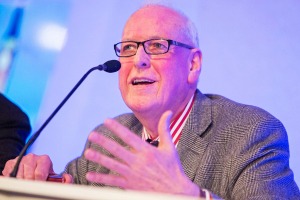 The Mile End Institute sustains Queen Mary’s fine tradition of involvement in public and political life at a time of fascinating, if not perilous, uncertainty for our country.
Lord Peter Hennessy

Our predecessor organisation, the Mile End Group (MEG), was founded in December 2003 by Peter Hennessy and his research students to provide QMUL with a lively forum to present the findings of postgraduate research. Over the next 11 years, MEG hosted over 100 'informal yet dynamic' events with increasingly high-profile speakers from Westminster and Whitewall which, as The Guardian noted in 2011, mixed 'high constitutional theory with low gossip to reveal how Britain is really run'. With its impressive array of speakers including Sir John Major and Tony Blair as well as former Cabinet ministers such as the then-nonagenarian Lord (Denis) Healey, Lord (Douglas Hurd), and Baroness (Shirley Williams), The Guardian maintained that MEG acted as 'a constitutional hard drive' in an increasingly turbulent period of British government.

In addition to high-profile veteran politicians, MEG was noteworthy for the number of recently-retired senior officials who it attracted to QMUL over the course of its 109 meetings. As well as former Cabinet Secretaries Lord (Richard) Wilson and Lord (Robin) Butler (who spoke about the Blair Government and the Butler Report), MEG was addressed by Sir Robin Mountfield, Sir Kevin Tebbit, and Tony Blair's 'Delivery Guru' Sir Michael Barber as well as dozens more 'Mandarins'.

Alongside its regular seminars at QMUL, MEG also held a series of distinguished lectures, marking the contribution of women to the House of Lords fifty years on from the 1958 Life Peerages Act, the research of the late Anthony Sampson and the national security and defence work of the late Sir Michael Quinlan. In other regular lectures now continued by the Mile End Institute, MEG commemorated the life of Queen Mary's very own Professor John Ramsden and the scholarship of our patron, Professor the Lord Peter Hennessy.

Today, the Mile End Institute (MEI) seeks to continue MEG's pioneering work about how the centre of British government operates while also focusing on the social, economic and political challenges facing the East End of London in 2022. In addition to facilitating QMUL's Civic University Agreement, the MEI also sponsors the University's new Arts and Culture Advocacy Fellowship Scheme which seeks to assemble a 'coalition of advocates to make the case for the arts and cultural sectors in London and nationally'.