Institute of Dentistry - Barts and The London 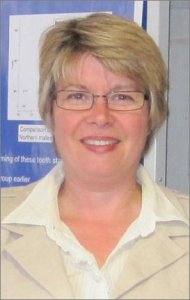 Helen Liversidge qualified in dentistry from Stellenbosch, South Africa. She worked in NHS and private general dental practice whilst at the same time completing an MSc (Mineralised Tissue Biology) and PhD (Human Tooth development in an archaeological population of known age) at University College London studying with Professors Alan Boyde and Christopher Dean (respectively).  She joined Child Oral Health in the Dental Institute, Barts and The London, Queen Mary’s School of Medicine and Dentistry in 1985.  Helen teaches undergraduate and postgraduate dental students in clinical paediatric dentistry and has supervised numerous postgraduate research projects, PhD’s and joint supervision with Universities in Dunedin, New Zealand and Niarobi, Kenya.  Most of these students have presented at national/international meetings and have published their results.

Her research area and most important publications relate to tooth formation and estimating age from developing teeth. The need for research with impact was highlighted by the 2004 tsunami when forensic odontologists lacked an evidence base comparison of methods and a new atlas to estimate age https://atlas.dentistry.qmul.ac.uk/?lang=english.  The new London Atlas of tooth development and eruption is free. An app has been developed and can be accessed here https://atlas.dentistry.qmul.ac.uk/?app=1

Watch the Age Estimation - how to use the Atlas of Tooth Development here.

She organises the London Oral Biology Group which meet several times a year for research meeting and attracts scientists with interests in dental anatomy, physiology, zoology and palaeontology.

The Atlas of tooth development and eruption was one of the Dental Institute Case studies for the 2014 REF. It was developed after the 2004 tsunami to help forensic odontologists estimate age. It is translated into 20 languages and is now routinely used in disaster victim identification teams around the world.

The growth pattern of Neanderthals, reconstructed from a juvenile skeleton from El Sidrón (Spain). 2017.

Malnutrition has no effect on the timing of human tooth formation. 2013. F Elamin, HM Liversidge