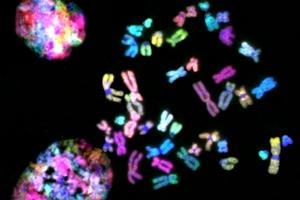 Since each cell in an organism contains the same DNA sequence, other features of genomes must determine the regulation of gene expression. We know that specific transcription factors and epigenetic modifications modulate gene expression, but three-dimensional chromatin structure also plays a role. Professor Sheer’s group has made significant advances that link higher order chromatin architecture to gene expression, and are conducting experiments to identify the key determinants of chromatin folding. The other major research area of the group is the molecular pathology of cancer. Cancer can be regarded as a genetic disease at the cellular level, since genetic abnormalities such as mutations and chromosome translocations underpin the process of tumorigenesis and cancer progression. It is important to recognise these abnormalities to understand the cancer process, and provide diagnostic and prognostic information to clinicians. Genetic abnormalities are now also opening new avenues for targeted treatment of cancer. The Sheer group have identified critical genetic abnormalities in many types of leukaemias and solid tumours, and recently made key discoveries on paediatric brain tumours.

Research in the unit is currently based on two inter-related themes: the structure and function of the genome, and the molecular pathology of paediatric brain tumours.

Higher order chromatin architecture
A central question in biology is how the genetic information is assembled, accessed and interpreted during the processes of development, cellular responses to the environment, and disease. Professor Sheer’s group is examining the relationship between the linear and 3D organisation of the genome and transcriptional regulation using two model systems:

Other studies include investigations into the role of CTCF and its paralogue, BORIS (CTCFL), in regulation of gene expression.