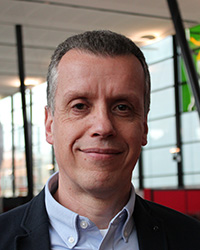 Tim Warner graduated in pharmacology in 1986 from King’s College London. He then moved to the newly established William Harvey Research Institute to pursue his PhD studies under the supervision of Prof. Sir John Vane (Nobel Laureate, 1982) during which time he was awarded the Premier Prix Annuel de Recherche en Phlébologie. In 1989 he completed his PhD and went to pursue his post-doctoral studies with Ferid Murad (Nobel Laureate, 1998) at Northwestern University and Abbott Laboratories, Chicago, USA. He returned to the William Harvey Research Institute in 1992, being awarded a British Heart Foundation lectureship in 1995. He was promoted Reader in Pharmacology in 1999 and awarded a personal chair in Vascular Inflammation in 2000, at which time he was the recipient of the British Pharmacology Society’s Novartis Prize. Prof. Warner has been listed by the Institute for Scientific Information among the top 0.5% of cited pharmacologists. He is past Director of the Blizard Institute (2017-2021) and has served as Deputy Dean for Research in the School of Medicine and Dentistry and Deputy Director (Research & Innovation) of QM's Life Science Initiative. Prof. Warner is a Fellow of the British Pharmacological Society, the American Heart Association, the Society of Biology and the Higher Education Academy. He is also a member of the British Society for Cardiovascular Research and the International Society on Thrombosis and Haemostasis. Prof. Warner is currently principal editor of the journal ‘Platelets’.

Professor Warner’s main focus of current research is into the regulation of the function of blood platelets. Recent studies have focussed particularly upon the ways the functions of platelets change as they age within the circulation, and this work is now supported by programme grant funding from the British Heart Foundation. He has also conducted numerous studies into the roles of different enzyme pathways in the formation of vasoactive mediators such as prostaglandin I2, thromboxane A2 and nitric oxide in blood vessels and blood cells, and so to the control of platelet reactivity within the circulation and the mechanisms of actions of anti-platelet drugs. This work has been conducted through multiple collaborations within QM as well as nationally and internationally. Locally, research into platelet reactivity is being pursued in collaboration with clinical colleagues in the Trauma Department, Haematology Department and Cardiac Directorate of the Barts and The London NHS Trust, and NHS Blood and Transplant.