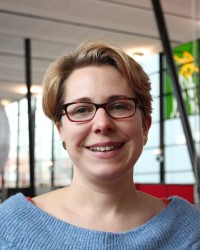 Dr Helen Rowe studied Virology at Warwick University with an intercalated year at Novartis, Austria, working on human dendritic cells. Her PhD was on cancer vaccines in Prof. Mary Collins' lab at University College London (UCL) and was funded by Cancer Research UK (2006). She did her postdoctoral work at the Ecole Polytechnique Fédérale de Lausanne in Switzerland with Prof. Didier Trono working on chromatin biology and epigenetic silencing. Her postdoctoral work identified KAP1/KRAB-zinc finger proteins as a key pathway controlling endogenous retroviruses in early development. She set up her own group at UCL in 2013 with a Sir Henry Dale Fellowship, funded by the Wellcome Trust and Royal Society. In 2016, she was awarded a European Research Council grant to work on transposon co-option through studying zinc finger proteins. Her labs’ work has shown that the HUSH complex regulates L1 elements in development, a class of transposon linked to cancer and inflammation. Another main finding of her group is that KAP1 modulates immune response genes in human adult cells. The Rowe Lab moved to Queen Mary University of London in January 2020 and are continuing to work on how epigenetic complexes regulate transposons and cellular genes, and how these pathways can go wrong in cancer and autoinflammatory disease. This latter work is funded through the Rosetrees Trust and a Barts Charity award.

Have you ever wondered how genomic dark matter contributes to disease?

An array of prevalent diseases such as cancers, inflammatory diseases and neurological disorders have been linked to the noncoding genome, which has been described as ‘dark matter’, due to its unknown function. The noncoding genome is dominated by transposon sequences, which amount to upwards of 50% of our DNA. Transposons are mobile elements that can jump within the genome but the vast majority of transposons are no longer mobile, due to mutation. Transposons carry regulatory sequences such as promoters, enhancers and silencers that have co-evolved with us for millions of years. A proportion of these transposon-derived regulatory elements have been adopted by the host to regulate our own genes. Diseases can arise when regulation of transposons and transposon-derived DNA breaks down.

We aim to pinpoint how transposons can drive or potentiate inflammation when epigenetic pathways are down modulated or derailed.

Transposons are regulated at the chromatin level early in development through epigenetic pathways. These involve targeted histone modifications by histone modifying enzymes and DNA methylation through DNA methyltransferase proteins. These changes lead to transposons and co-regulated genes being switched ON or OFF, as a result of changes to chromatin structure and function. Our mission is to understand how epigenetic pathways regulate transposons and genes in normal and disease contexts. The pathways that we focus on involve KRAB-zinc finger proteins, which exhibit sequence-specificity for transposon-derived DNA, KAP1 (aka TRIM28) and the HUSH complex. These complexes recruit histone methyl transferases including SETDB1 to deposit H3K9me3, leading to transcriptional repression.

Transposons have been recently unveiled to play fundamental roles in human health and disease largely through epigenetic mechanisms. A greater understanding of these pathways and how they can become deregulated in cancers and autoinflammatory diseases will lead to the discovery of new drug targets and therapies.

The Rowe Lab are part of the QMUL Epigenetics Hub and are based in the Centre for Immunobiology.