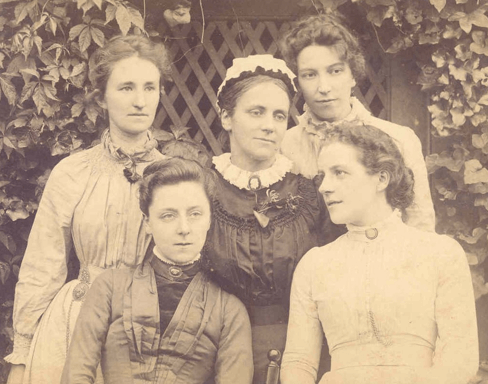 In 1882, the same year as discussions began in East London about a People’s Palace, across London in Hampstead the first women’s residential college in London Westfield College was being founded.

Ann Dudin Brown, a wealthy heiress and philanthropist, provided financial backing for the project and bought the campus, buildings and provided personal financial assistance for students in need. Constance Maynard, the first principal of Westfield College, opened the college 2 October 1882 with just one other staff member and five students. In this period women were rarely educated outside the home and faced many barriers to accessing higher education. Maynard herself was discouraged from receiving her education by her father who offered to buy her a new pony instead. Luckily through encouragement from her cousin Mary she received the education at Girton College Cambridge that inspired her to pass on this gift to other women.

The small community of Westfield College faced an uphill struggle during its early years as women’s pre-university education was not prioritised by their families in comparison to sons. Many of the first students had never previously been taught in subjects like Latin and Botany and many left Westfield without receiving a degree.

However, one of the first cohort of students Anne Richardson graduated with a first class degree in Classics in 1886. She remained part of the Westfield community as a Classics Lecturer until 1925 and was even acting Principal from 1917-1919. Even students like Mary Alice Douglas, who left in 1885 without attaining a degree, went on to improve conditions for the next generation. Douglas, who herself had only ever received home education prior to Westfield, later became a headmistress at a school in Salisbury and a member of local education boards.

While Westfield began only as an examining body of the University of London in 1882, recognition gradually increased until it was fully admitted as a school of the University of London in 1929. In 1925 the historian and librarian Caroline Skeel became Westfield’s first Professor. In 1932 Westfield received a royal charter. In 1933, ten years after her retirement, Constance Maynard, the first principal of Westfield, finally received the MA degree she had completed in 1875 but was not awarded at the time because she was a woman.

Founder Ann Dudin Brown wrote that in “all my enterprises, Westfield has proved the most satisfactory” [1913].