Benedicta studied Medicine and medical education in Barts and the London. She is from East London and was born in Ghana. 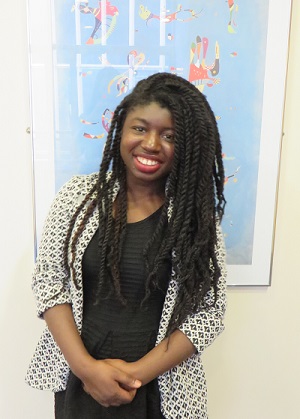 "I came over to the UK when I was 11 with my mother and three siblings. In primary school I always got good grades and was top in my class. However, I struggled in secondary school. I was bullied because of my strong Ghanaian accent, and because I was different. I found day-to-day life difficult. I still worked hard though as I wanted to become a doctor. I remember a school careers advisor telling me I would never be able to study medicine or be a doctor, because of my background. She said people like me don’t end up being doctors, which was very discouraging. Fortunately, however, I had a lovely head of year who pushed me on and told me I could do it – she inspired me to pursue my goal despite what everyone else was telling me.

"At the same time, I was also finding life at home more and more difficult. My family became homeless in 2008 and we had to couch surf with friends for months. I didn’t get on very well with my mum, and after I finished school I decided to move into a young person’s accommodation to get away from everything. I was fortunate to get a place on the Doc Route Scheme, which is a pre-medical programme run in partnership with Barts and the London School of Medicine and Dentistry, aimed at helping people from lower-socio backgrounds pursue a degree in medicine. I spent the year rotating through various hospital departments, and at the end I was awarded a place on the first year undergraduate programme at Barts and The London, which I began in 2010.

"I really wanted to be able to save enough to get my own place, as living in the young person’s accommodation wasn’t very nice. No-one had any ambition in life. The police were always around. It was pretty grim and I found it hard to study. However, it was cheap. At the end of my first year some friends on my course asked me if I wanted to live with them, which was wonderful. However, I was aware that I might not be able to afford to stay there so I kept my room at the young person’s accommodation too. I was effectively paying two rents, but they were both very cheap and it meant I had somewhere to fall back on should one go wrong. What I didn’t realise however, is that Newham Council had almost doubled the rent of my accommodation because the Olympics were coming up. Because I wasn’t going back frequently, my mail was being stashed away and it wasn’t reaching me. Eventually, I got a phone call telling me I owed Newham Council £12,000 in rent, interest and fees.

"I had no idea what to do, and I had no one to turn to. The Council began calling me all the time telling me I owed them money, and that they would take me to court. This really affected my studies and I also became extremely depressed. Luckily, Queen Mary’s Advice and Counselling service helped me enormously and with their help we were able to reduce the payment I owed to £9,082, however this was still a huge amount. I was very close to giving up on my course altogether. In the end, I interrupted my studies for a year so I could work to reduce my debts. And I also began applying for other funding.

"The start of my fourth year was very difficult as I still had a fair bit to pay back, and I couldn’t afford accommodation. I was effectively homeless once again, but luckily my friends have let me couch surf with them. The Medical School have also been great. They provided me with a mentor who has really helped me work things out. I now have an agreement with Newham Council that each term, when I get my loan and grant, I pay them back a few hundred pounds. It was a very tough year though, due to the money I owed and not having a permanent base. I was contemplating interrupting my studies again. However I really didn’t want to do this, and I also didn’t want to take out any more loans.

"When I found out I had received an alumni bursary I was over the moon. I cried! It was a huge weight lifted off my shoulders as it meant I could meet my payments and not have to worry as much. It meant I could begin to see a light at the end of the tunnel and finally things were moving in the right direction.

"My plan now is to complete medical school without any more interruptions. With all the support I have had, I realise I can do what I set out to do and I can fulfil my dreams of being a fully qualified doctor. I either wish to be a GP with special interest in Medical Education or I would like a career in Obstetrics and Gynaecology.

"Thank you very much for supporting not just myself but the University. Please continue to keep supporting people like myself. I was ready to give up entirely but with this funding I could pick myself up. Because of your bursary I am able to continue my studies. Hopefully in the future I will be able to give back to students in the same way. Thank you."