As part of our Islamophobia Awareness Month campaign, we interviewed Sawdah Bhaimiya, Co-Founder and Co-Editor-in-Chief of Diaspora Speaks. 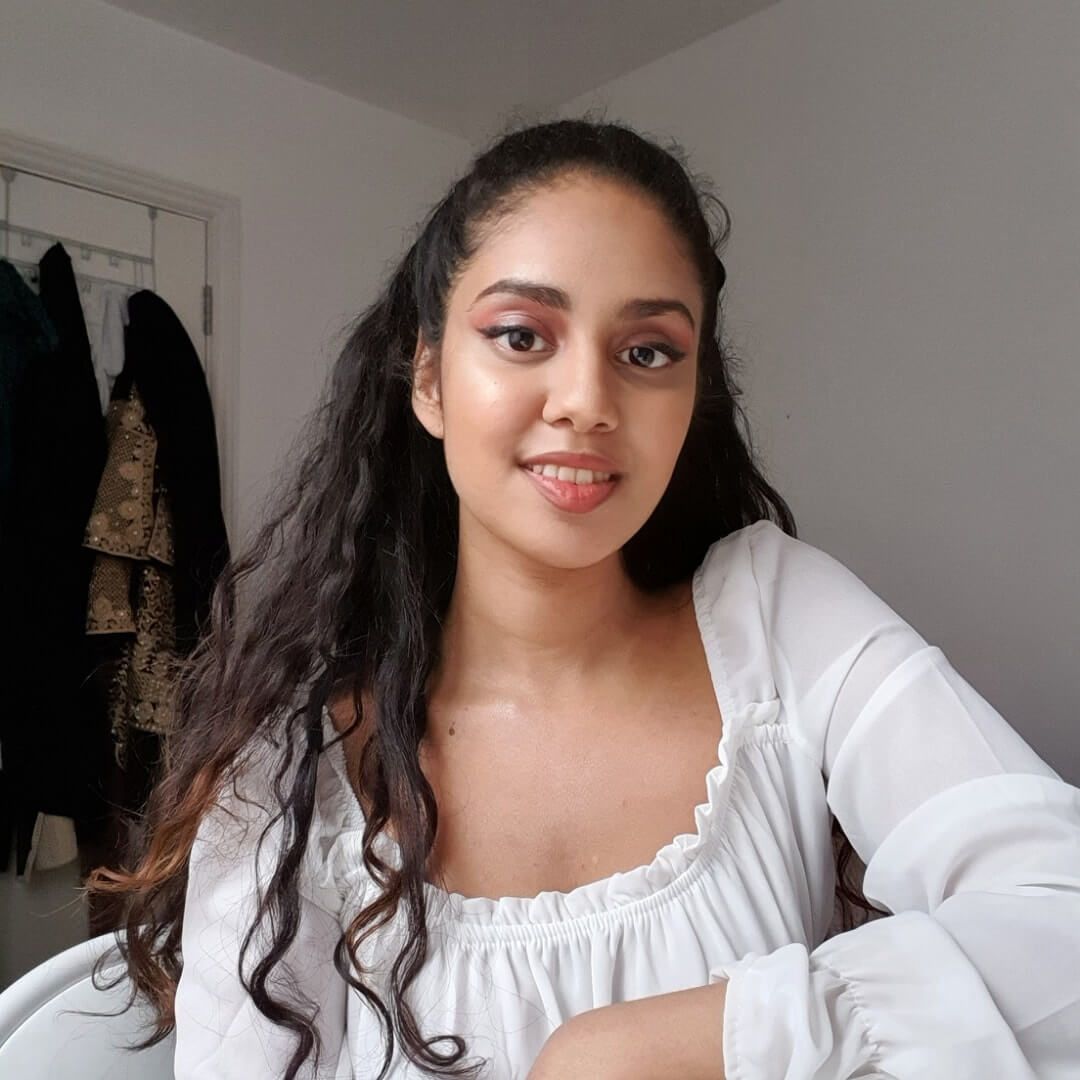 You are currently studying English at Queen Mary. What sparked your interest in this specific degree? English was a subject that I excelled at throughout my secondary school education, as well as during my A-Levels. I enjoy exploring meaning and unearthing new perspectives in literature. All of the texts that we study have something to reveal about the period of history when they were written, and often literature encodes the things that might not be socially acceptable to talk about openly. This idea is really important because the discussion of so many topics such as religion, sex, sexuality, and women’s right etc. was heavily controlled by the government and church. Literature is a space of imaginative freedom and that’s what makes it interesting. I was especially attracted to Queen Mary’s English course because of the diversity and range of modules available. The fact that there were so many options taught by academics who are experts and dedicated to their field of study was really appealing to me.

What aspects of your degree have you found most enjoyable so far? What modules have particularly stood out for you and has anything surprised you in your studies? I like that at degree level, the idea of writing essays has moved on from having a set and rigid answer. I get to treat every assignment like an investigation or a piece of research where I can assert my own opinions too.

The modules that have stood out to me include Postcolonial and Global Literatures, South African Literature and Culture: Apartheid Modernities and Apartheid Possibilities, and Writing Empire: The Eighteenth Century. All of these modules have explored literature from beyond a homogenous European perspective. I have learnt about the impact of colonialism from the perspective of the colonised. Although the expansion of the British Empire was always taught positively during my secondary education, I have seen it through new eyes and I now understand the long-lasting legacy and destruction it has caused. This has made me so much more interested in decolonisation and addressing racism.

What has been so special about your time at Queen Mary so far? Being at Queen Mary has exposed me to so many different points of views, cultures, and identities. My world has become a little bigger, which has made me a much more open-minded and inquisitive person.

Do you think it is important to see Muslim representation in the curriculum? Muslim representation is really important in the curriculum because there needs to be a greater reflection of the diversity of the UK in the education system. I think Queen Mary does a good job of this by including modules such as Writing Muslims, but this barely scratches the surface. I think there needs to be greater focus on the positive impact that Muslims have had in the UK and around the world to shift away from the stereotypical narratives of Muslim “terrorists” in the media. Young Muslims should be able to see themselves in the history of the UK and feel more included. If Young Muslims see people like themselves in positions of power and responsibility, then that will restore their faith in the system and make them feel more inspired.

You are the Co-Founder and Co-Editor-in-Chief of Diaspora Speaks. What is Diaspora Speaks and what does it aim to do? Do you have any specific articles planned for Islamophobia Awareness Month? Diaspora Speaks is a magazine for students of colour and its aim is to represent the diversity of the university. I think a lot of ethnic minority students at Queen Mary don’t realise that they have a medium through which they can express themselves, and often, it might be because they don’t see themselves reflected in student media and in journalism more generally. This can be intimidating, and so Diaspora Speaks aims to be a welcoming space and we hope to break those barriers that I mentioned above.

We have released some powerful articles from our Muslim writers this month and you can check them out on our website diasporaspeaks.co.uk. There is a broad range of articles on Muslim identity from reflections on representations of Muslim in the media, to Islamophobia in British politics, as well as poetry and prose. These pieces should really be thought-provoking for readers.

Additionally, you regularly write for QMSU’s CUB Magazine. In your article, ‘Becoming Hijabless’ you describe how you made the decision to remove your hijab as an act of self-empowerment. Can you elaborate on this please? How have people treated you differently now that you no longer wear a hijab? Self-empowerment is about choice. Everyone should have the right to choose what makes them feel confident and true to themselves. For some people, that could mean wearing the hijab. For others, it could mean the opposite. I support both decisions as long as it makes a person feel more confident.

Personally, I feel more visible without the hijab which I think is a testament to the ways in which women who wear the hijab are discriminated against and not treated equally. I feel as if people actually listen to me and view me impartially without making presumptions or judgements about my religious identity. I think this all shows that there needs to be more done to make space for Muslim women and to challenge discrimination.

In this same article you write: “I spent two years of my life living a double identity: I felt like an imposter. People saw a devoutly religious girl shrouded in an abaya and hijab on the surface. I never gave my opinions, people assumed what they were as my hijab spoke for my views. I was invisible and completely visible at the same time.” You do not claim that you have disowned your Muslim identity by removing your hijab. Aside from appearance, in what other ways do you identify with your Muslim identity? I have grown up in a Muslim home, so I have always celebrated Eid, fasted in Ramadan, and ate halaal food. There are certain values instilled in me from my Islamic upbringing such as giving charity, treating others equally, and practising mindfulness in my daily life and much more that will always be important to me. Now that I’m a little older, it’s just about making informed decisions about what I choose to practise Islamically and what I don’t. However, my values have largely been informed by my Islamic upbringing.

It is interesting how you describe an item of clothing as a form of censorship through the above quote. You constantly strive to have your voice heard, whether that is through the creation of Diaspora Speaks, writing for CUB Magazine, or launching your own radio show ‘Chai with Sawdah’. How did you find your voice? What topics do you feel passionate talking and writing about? I found my voice through writing and talking about the things that are important to me. I’m passionate about addressing racism and discrimination as well as challenging the status quo and the barriers in society. I want to drive real change even if it’s on a smaller scale.

On the topic of literature and media, are there any problematic stereotypes of Muslims and Islam in western literature and media that you would like to dispel? That it’s all black or white. Western media tends to promote narratives that homogenizes Muslims and ignores the nuances and diversity of identities that comes under the label of being Muslim. Not every Muslim is religious, and not every religious Muslim is a radical.

What does Islamophobia Awareness Month mean to you? Are there any Muslim historical figures you wish more people knew about or anyone who has inspired you in the Muslim Community? It’s a month for raising awareness, reflection, and driving change. Although this isn’t something that can be limited to one month in a year, I think that it’s still great that just the promotion of this month means that more people know what Islamophobia is.

Not so sure about historically but there are lots of Muslims who are an inspiration today e.g. Suhaiymah Manzoor-Khan, Nafisa and Selina Bakkar, Munadiah Aftab etc. All of these women are actively fighting for Muslim rights and it is inspiring to follow their journeys on social media.

What are the key things you want people to take away from IAM? Can you recommend any resources people can use to educate themselves on Muslims and Islam? A great website that people can learn more about Muslim identity from is Amaliah, which is an online platform dedicated to women of colour and founded by Nafisa and Selina Bakkar. I think hearing Muslim voices and actually acknowledging their perspective without presumptions and judgements is an important step.

In your opinion, what are some of the most pressing issues faced by Muslim communities and what do you think needs to be done to challenge and raise awareness of such issues? Can you also touch on some of the issues relating to the plight of ex-Muslim women? I think one of the most pressing issues faced by Muslims is the dangerous and homogenous representations of them that have spread through the media worldwide. These stereotypes about Muslims being radicals and terrorists has meant that peaceful Muslim communities worldwide have become victims of violent persecutions and genocide from Palestinians, to the Rohingya, to the Uighur in China. There is clearly an active threat against the freedom of Muslim identity. The United Nations needs to take more pressing actions to ensure the freedom of these Muslim groups, and that means holding those accountable that enforce these discriminations. I don’t think it’s a matter of raising awareness. We have been raising awareness for years and years. Everybody knows what’s going on in China, Palestine, and what happened to the Uighurs amongst other oppressed Muslim communities in the world. It’s a matter of world leaders taking an active stance against persecution. Until that happens, real change cannot be enforced.

On the topic of ex-Muslim women, I think that there needs to be more acceptance to change within the Muslim community. I think there’s a lot of rigidity, patriarchal customs, and outdated traditions that are enforced within Muslim communities that can prevent people from having the freedom to make informed choices. If we don’t accept that this is true, it will be hard to move forward. Muslim women bear the brunt of these customs because the customs are often patriarchal and that means their freedoms are limited and restricted. There needs to be more emphasis within the education system on women being independent, self-sufficient, and especially financially independent. These things are key to emancipation.