In their own words, alumna Joy Hall and alumnus Barry Hall narrate their love story, telling their audience how "over thirty years after we first met we were married with our three daughters as bridesmaids. Next year we will celebrate our silver wedding anniversary." 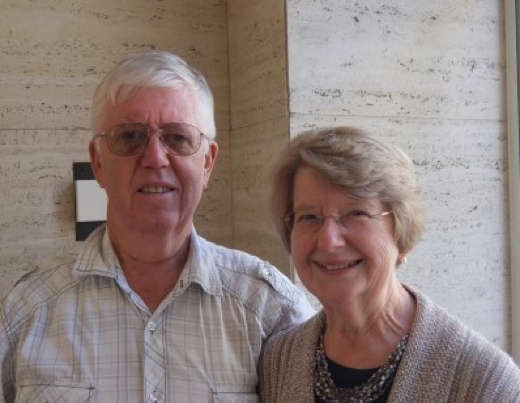 Back in the 1960’s both Joy and Barry were students at Queen Mary College, London, Joy living in Canterbury Hall and Barry in Commonwealth Hall next door in Cartwright Gardens.

"We met at St. Benet’s Church at Queen Mary College (QMC) where Barry, Chris and “Big” Barry were servers. “Big” Barry was about one inch taller than “Little” Barry! As part of a group of friends we enjoyed university events such as the “Scooter Rally” where QMC students rode to Brighton on children’s scooters, informal get togethers to drink coffee and listen to records like “West Side Story” in the halls of residence, as well as the glamorous college balls that wound up with breakfast at Covent Garden market at 5:00am in the morning!

It all changed after the summer vacation however, because the two Barry’s had met up in Switzerland and, while there, were involved in a road accident so serious that they both had to miss a whole year of University.

Joy and friends visited them many times in hospital and witnessed the battles needed to overcome their injuries. Fortunately they recovered remarkably well, but by the time they were ready to come back to QMC, Joy had to leave for a year in France as part of her modern languages course. When she got back for her final year, the Barry’s had both finished their courses.

We lost touch. We both got married and had our families. Much, much later, our marriages failed and so did that of Chris, who was part of our original group of friends. Chris’s new wife was writing Christmas cards one year and pointed out to him that he had two friends living very close to each other – Joy in SG4 and Barry SG3.  She thoughtfully gave each of us the address of the other in case we wanted to make contact.

And the rest is history!

In 1995 during a school trip to India that Joy was helping to supervise, Barry proposed in front of the Taj Mahal. The pupils were delighted to join in our celebrations: one signed a card: “May your marriage be as romantic as the proposal!”

And so, over thirty years after we first met we were married with our three daughters as bridesmaids. Next year we will celebrate our silver wedding anniversary.

Since taking early retirement we have enjoyed some great holidays in far flung places.  We are much involved in village life as Health Walk leaders and members of the Probus club, Patient Participation Group, Parish Council and three Town Twinning Associations.

Joy is a volunteer Victorian Teacher at the Hitchin British Schools Museum and is raising money for them through her new “career” as a Women’s Institute speaker, sharing thoughts and pictures of Japan, Myanmar, South America, Dubai and Uluru…