In his own words, alumnus Andreas Beckwith shares his alumni love story and how despite not meeting his wife and fellow alumna at Queen Mary, the University did play a role in their relationship, to the extent that their baby daughter will "no doubt be encouraged to continue the family tradition and study at Queen Mary at some point in the future!" 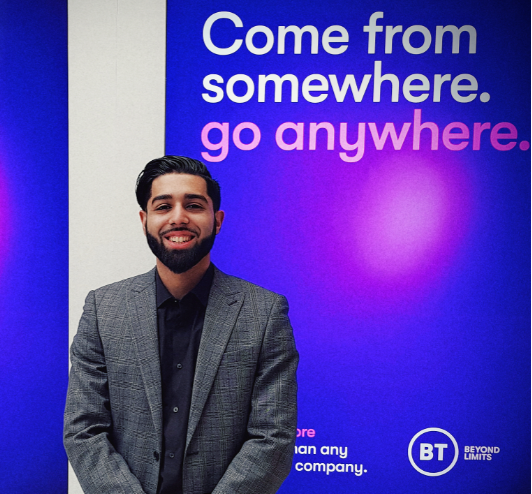 Katherine Tinoco Reyes and Andreas Beckwith passed through Queen Mary at different times, studied different subjects at different levels, and while they didn’t meet at Queen Mary, the University formed part of their story together.

Andreas studied his BA at Queen Mary from 2006-2009 studying English Literature, where he was also chosen to work for the University as a student rep for the department of English and Drama.  In the summer of 2008 he worked at Camp America in New Jersey, and the experience motivated him to learn Spanish. It was a desire that took him first to Spain teaching English, then to Peru, where he worked first for a tourist agency, and then for an agency representing The BBC in Latin America. It was in Peru where Andreas met Katherine. They met in Lima in September 2014 at a sushi restaurant where friends had brought them together. They got on well and one thing led to another and they started dating, and then became engaged.

In May 2015 Andreas brought Katherine to London for the first time to show her around, and one of the attractions to show her was his alma mater Queen Mary. As Andreas gave her a tour round the University’s facilities, little did Katherine know that 2 years later, she would be back at Queen Mary to study her second MSc.

In 2016 Andreas and Katherine got married and then in 2017 Andreas decided to come back to the UK and convinced Katherine to come with him; the best way they found to come to the UK was for Katherine to study a Masters. Katherine was already an established HR professional with over 10 years of experience, and 4 years of management, and she decided to study an International Human Resources Management MSc to gain more experience in Europe and establish herself in the UK. Having studied at Queen Mary himself, Andreas knew the quality of the University, and recommended that Katherine study there, as its academic excellence, combined with its practical job-support, would help Katherine get established in the UK.

No sooner had Katherine started her MSc, she was elected as student rep, where she organised several events to create team spirit amongst her colleagues, organising days out, including participating in Queen Mary volunteering, which Andreas accompanied her on too. Katherine’s efforts academically led her to gain a 1st in her Masters, and in addition, she gained extra-curricular recognition when she was voted Course Rep of the year from all other course reps in post-graduate studies.

Since graduating, Katherine has gone on to become Human Resources Manager for the Environmental Defense Fund Europe, and to found her own dance group ArtPerUK, teaching Peruvian folkloric dances in the UK. Since returning to the UK, Andreas has worked in marketing, and was recently contracted directly to work at the BBC.

For both Andreas and Katherine, Queen Mary holds a special place in their lives; for Andreas, it was a life-changing experience of moving out of a small town to the big wide world of London, where he became immersed in new culture and diversity. Being at Queen Mary played a part in nurturing his desire to explore and get out into the world.  For Katherine it was her first base in a new country, the place where she made her first friends, and where she gained the confidence that she could be a success in the UK through her endeavours. For Katherine, it holds extra special meaning because Queen Mary hosted the first dance class of her group ArtPerUK, and went on to host several classes in the QMotion gym.

“Enjoy your time at Queen Mary, you are in the heart of London, and you should take advantage of this amazing opportunity to expand your horizons culturally and through your studies.” Andreas Beckwith

“Queen Mary is a great place, that opens the door to all backgrounds and people from all walks of life, where you can share your culture with other people, and people are open to it. The university offers some really great opportunities academically and extra-curricular, it’s up to you what you make of it.” Katherine Tinoco Reyes.

Andreas and Katherine have gone on to have a baby girl who was born in 2019, Caitlyn-Sophie who will no doubt be encouraged to continue the family tradition and study at Queen Mary at some point in the future!