Following the publication of alumnus Navjot Sawhney's profile, humanitarian engineer and co-founder of The Washing Machine Project, we caught up with current BEng Biomedical Engineering student and part-time Design Engineer for Nav's project, Adiba Khan. Stay tuned for part two of Adiba's profile once she has graduated! 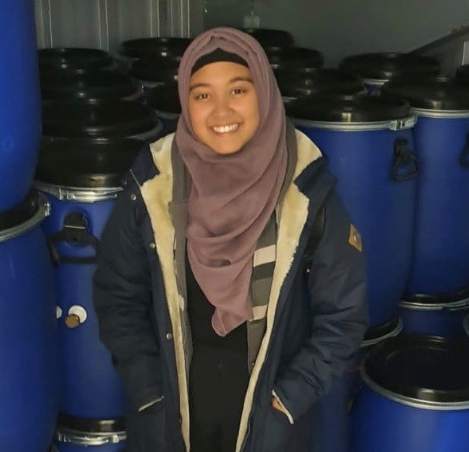 How did you meet Nav, co-founder of The Washing Machine Project? I was part of the Engineers Without Borders Society here at Queen Mary last year and the year before, as Vice President and now I am President. I met Nav last year through an EWB event as he was invited to give a talk by the then President. Nav spoke about the project he worked on before, an environmentally friendly cook stove called Prakti, which he helped to design and develop in rural South India. He also mentioned his plans to launch The Washing Machine Project and I remember being really interested to hear more. This year I met him again at another event where he gave us updates on The Washing Machine Project; following this, I sent him my CV and said I was really inspired by the project and that I’d love to apply my skills and get involved where possible. So now I am one of the part-time Design Engineers; I’ve helped to create the handle design grips and to manufacture the products as well. As a team we’ve recently created 50 of the manufactured products based on the prototypes and they’re going to be sent to Iraq!

How does it feel to be part of a project that is actively making a difference in people’s lives? It feels incredible. I feel like I’m making more of a difference by actively doing something; I can see how the actions of my team and I will affect the lives of the people who need our product. The project is much more practical compared to my degree; I’ve learnt so many skills that I wouldn’t have learnt through watching lectures or attending lab. The team consists of so many different people from different backgrounds and with different skills and every day jobs, people to whom the project is voluntary and part-time. Working with such amazing and inspirational people has been a really good learning experience for me alongside my current studies.

How have you found working on the project part-time whilst studying? I was scared to apply to something like this because I haven’t done anything engineering related before. Initially it was quite scary because it was beyond my comfort zone, but when I started working there everyone was so lovely, they helped me settle in and gave me a background about what we’re doing and why we’re doing it and what our future plans are. My degree is quite difficult but I am quite good at organising my time; during the weekends I would (and still) work on the project and use the week to focus on my studies. We also used to have weekly meetings through Skype where everyone would come together and discuss what they had been working on and how we could improve things going forward.

Have you had any thoughts on what you would like to do once you graduate? Would you like to work on more projects like The Washing Machine Project? Right now I am focusing on my exams and applying for part-time jobs. There are different stages to the project; the next stage is manufacturing on a large scale and I have spoken to Nav and said that I would like to be part of this stage next year. The project is part-time for everyone, which means that I can still apply for other roles outside of the project.

How has it been working alongside Nav and learning from him and his experiences? And listening to his talks when he comes back to Queen Mary? Nav is a very inspirational man, just by listening to him you feel so motivated to change the world based on his experiences. The fact that he is from the same University as me also shows that someone like me can do something that could change the world and have such an impact on people in need. Humanitarian is also at the forefront of all of Nav’s engineering, he thinks about people a lot and it is his humanity which makes him very relatable.