Andy graduated in the 1970s but remains very close with Queen Mary and has been giving back to the University since our first ever telephone fundraising campaign! He kindly shared many memories of his time here and why he supports today’s students. 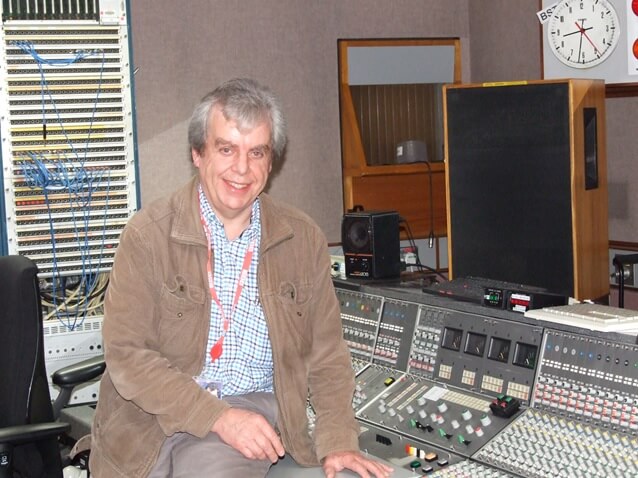 This is me in one of the BBC World Service studios at Bush House – I continued to do freelance shifts there in my original job of Studio Manager until 2012, when the whole operation moved to New Broadcasting House near Oxford Circus.

"I’m Andy Popperwell and I grew up in Cardiff. My family were all professional classical musicians, and while I did a lot of music in those days, including five years in the National Youth Orchestra of Wales, I was the odd one out in that I was interested in science. My Physics degree in 1974, followed by a postgraduate year at the Royal College of Music, gained me a job as a Studio Manager at the BBC World Service. I was on the staff there for twenty years, before a reorganisation led to a change of career: I became a Further Education lecturer at Havering College in Hornchurch, Essex, teaching radio production and acoustics, as well as running courses for 16-19 year olds, again for twenty years.

"I’m now retired, and I volunteer at the Essex Record Office Sound Archive and at the Copped Hall restoration project on the edge of Epping Forest – I’m setting up our own sound archive there.  I’ve also embarked on a Master’s by Research, looking at the soundscape of the eighteenth century.  Being a student again is both exciting and terrifying!

"An old family friend, Professor John Bastin, was an Astrophysics lecturer at Queen Mary College, or QMC, as it was back then. He showed me around, including the recently arrived specimen of moon dust straight from the Apollo landings, and I liked what I saw. Physics was my best subject at school, and I liked the curriculum at QMC, which allowed me to pursue my strengths. The flexibility paid off in that, as well as doing my dissertation on the historical development of musical tuning systems, I could take a final-year unit in 'World History since the end of the 19th century' – I’m sure this also helped me to get into the BBC.

"John Bastin later became Head of Department and last year I went to his funeral. But I still have one of his rather good watercolour paintings on my wall. He was a lovely man.

"Colonel Tong, who was then the Registrar, was also a significant figure. He ran musical events at the University and it was he who found the funds to pay for the first Director of Music, Howard Williams.  Howard and I built, from a kit, a harpsichord for the student production of the Beggar’s Opera.  It’s great to see that Dr. Paul Edlin is continuing the tradition.

"I’m still in touch with a few people I studied with. To any students reading this, just remember, a university friend is for life, not just for Freshers’ Week!

"Possibly a significant moment was that unit in World History I did in my final year. In those days, there was less emphasis in science subjects on writing skills.  I wrote my first essay – it was on the ‘Breakup of British India’, and I still have it somewhere – and the lecturer, the wonderful Dr. Freda Harcourt, called me in and explained, gently, how bad it was(!) and what I needed to do to improve.  After that, I got As and Bs for all my essays.  Or, at least I think I did!  I owe a great deal to Dr. Harcourt, and I’m sure that I wouldn’t have gone on to writing radio science scripts without her help.

"In those days, almost everyone received a local authority grant, with a means-test for one’s parents. I was fortunate in that my father always paid his share of my grant, so although my income wasn’t large, I always had enough. I supplemented this with summer-holiday jobs, often driving delivery vans up and down the South Wales valleys, and by doing evening porter duties at my hall of residence, Maurice Hall. You got £1.50 for answering the phone and keeping an eye on things from 7.00pm to 1.00am. But beer in the bar was only 12.5p a pint in those days…

"I was, however, aware that there were quite a few fellow students whose parents either couldn’t or wouldn’t pay their share, and these people struggled to make ends meet. I knew one mature student who had a family and who found it extremely difficult to cope on a low income.

"Having spent many years as an FE Curriculum Manager, I’d helped a huge number of students to apply for university. Many of them were the first in their families to take this opportunity, and many were worried about tuition fees and were anxious not to get into debt.  My line was always that university was an investment rather than a cost, but some very good people were still cautious about taking this step. So anything I can do to help young people (and older ones too!) to take the life-changing chance of Higher Education must be good.

"On a more personal note, my late mother was a refugee, coming to Britain in late 1938 at the age of 14, and good people helped her first to go to school and then to Cambridge University, which changed her life forever. So my donations are very much in memory of her.

"I always feel delighted when I read about how my donation has helped students at the University. Throwing money into a pot can seem impersonal until you see real people receiving real help and gaining real benefit. In time, their efforts will be rewarded and they’ll pay the country – and indeed the world – back many times over. And I’ll feel a warm glow of satisfaction that in a small way I helped.

"I’ve noticed that Queen Mary is far more diverse than it was in the 1970s, and this must be a good thing. It’s particularly good to hear that many students are recruited from the local area – I remember very few such people when I was there. There also seems to be a lot more support for students these days, with encouragement and help for those from a range of backgrounds, as well as a great emphasis on recruiting female students into traditionally male subjects like engineering.

"Some advice for today’s students - get organised! It took me a while to gain soft skills like this. You might find a particular topic difficult, but always persevere, ask for help and use every technique you can think of and you’ll get there. And don’t forget to have fun!  University shouldn’t just be endless coursework. Whether you play in the University Orchestra, or learn mountaineering (I did both) or something else, it’ll all help towards your overall education and employability. I speak with some authority here: for about five years I was a recruitment manager for the BBC World Service, and what a candidate did outside her or his degree was just as important as the certificate at the end of it."