I didn’t speak English particularly well when I came here... Queen Mary has given me the language skills and the courage to be confident in my everyday working life... My undergraduate studies were all about building foundations, pretty solid ones at that, to move forward and be able to follow my dreams. My degree truly opened up the world. 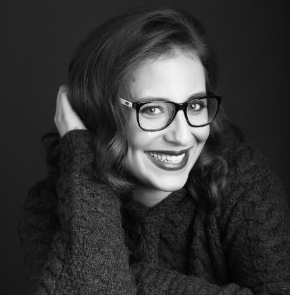 What did you study at Queen Mary and what are you doing now? I did a Film and History joint degree and I’m currently working for Rocliffe as a Development Executive; I really love how many scripts I get to read in my role. I am also building my own slate, it has 3 projects on at the moment.

Why did you choose to study at Queen Mary? What sparked your interest in your chosen course? I’m originally from Hungary, and after finishing high-school everyone kept asking me what I wanted to do, but I didn’t have a definite answer; all I could say was that I liked Film and History. I was fascinated by period dramas, biographies, historical dramas, sci-fi and fantasy – all of which had history in common. So, people were like that’s cool, but you can’t do anything with that. This bothered me, so I Googled the words ‘Film and History course’ and I always knew that I wanted to study in England, so that helped me limit my search further. I almost ended up in Scotland as Saint Andrews offered me a place, but then Queen Mary came along and I decided to come to London instead. I’m pretty happy about that. I would have ended up somewhere entirely different had I chosen to go somewhere else.

Last year you organised a Summit for students at Queen Mary. Can you describe the purpose of your Summit and what it involved? It was a two-day masterclass for professional filmmakers, mainly producers and directors who have already completed a couple shorts and who are working on their first features. I extended the invitation to Queen Mary students and we got a couple of stellar volunteers who helped us out at the event and a few more who came to enjoy the panels. The aim of the masterclass was to raise awareness and teach the attendees about sales and distribution and everything it entails. It is a big deal in my opinion, one that often gets neglected – which is a shame because otherwise how else will you learn how to make money as a filmmaker out of your passion project? Knowing your audience is a key element in filmmaking and we hardly ever talked about it, and the business side of filmmaking, during my studies. The only reason why I knew – quite vaguely I must say – how a film turns up at a cinema after it is produced, was because I was working at Odeon Cinema Leicester Square, where the distributors held a lot of premieres and galas, and the BFI LFF was also happening. Clearly, I am very passionate about the subject which is why I went on to study it for my MA at the National Film and Television School.

You also attended our fourth annual alumni reception at the House of Lords last year, what made you want to come along to the event? I’d never been to the House of Lords before, so I wanted to see it for myself; it used to be my hobby to visit historical palaces and stately homes and it was a sore point for me that I had not yet visited Parliament. On a weekly basis I also go to 1-3 networking events within the film industry, so I wanted to go somewhere that was safe and familiar, but maybe not related to film this time – just to meet people outside of my little box, people from the ‘real world’.

Why did you choose to study at Queen Mary? It was one of the only universities that offered the choice of subjects I liked, and had the calibre and prestige that I felt I needed. It was my dream to study in the UK since I was a child, so the university itself had to be something cool so as to fulfil this.

How did your time and study at Queen Mary help your career and development? I didn’t speak English particularly well when I came here. Of course, I had the required IELTS grades, but I don’t think anyone can say with honesty that a single paper will grant you the professional efficiency of a native speaker. So, I worked extremely hard translating medieval parliamentary documents for history, ancient dramas for my lit modules and very high-brow half-French half-English texts about auteurs and the meaning of cinema for my film modules. It was a hard and sweaty job. I feel terrible for the teachers who read my very first essays; I made some colossal and very awkward mis-translations. Also, because in Hungary we were trained to write essays in a completely different manner, picking up the cultural norms that the English education dictated was a very difficult ride. I think I cried when I got my first D’s and C’s. I’ve never got anything really worse than B’s in my entire life, and even that was quite rare...only in subjects I didn’t particularly care about. So, I worked hard until I cracked what was needed from me and then I started getting A’s again. Queen Mary has given me the language skills and the courage to be confident in my everyday working life.

I think BA is a base for what you go on to do next – unless you’re already very focused and have the world figured out, which I didn’t. My undergraduate studies were all about building foundations, pretty solid ones at that, to move forward and be able to follow my dreams. My degree truly opened up the world.

Why is it exciting to do what you do? I’m not too sure, maybe because I’m a nerd! I like reading, watching stuff and I like numbers and tidy colourful excel sheets. There is a hint of order and creativity mixed together with craziness and freedom in the freelance lifestyle. It is exciting because it is new and constantly challenging. It keeps me on my toes. There’s never really any real rest – once you finish a project, you take one long deep breath, then you go off and start frantically looking for a new project (often before you finish the previous one). It tends to excite me every day and even though it is a very hard and difficult game, it can be rewarding as hell.

Before my current role at Rocliffe, I’d been travelling and working from abroad. When you freelance you work for yourself, you decide your own hours and where you want to work from. There’s a lot of freedom in that – however, you also have the cruellest, maximalist boss you can ever get, who never gives you a break, won’t event let you go to sleep and dream about something nice until you have listed everything that still needs to be doing in your ENTIRE life: YOURSELF.

Other times when I do different types of freelance work, like working as a Producer’s Assistant on set, I have pre-agreed hours and I go when the call sheet tells me to go. Again, other times, when you do a more office-based job for a few months (I did those on freelance basis as well, when you pre-agree you’ll be with the company for 3-6 months for example) then you have perfectly normal office hours and a balanced routine which lacks some excitement for me. I like the craziness and chaotic nature of being a freelancer – it’s a dance that seems crazy for others, but when you find your balance, the steps are perfectly choreographed.

What was so special about your time at Queen Mary? I guess it will have to be the fact that I met my two best friends at Queen Mary by accident and some amazing teachers who were very supportive and inspiring. We are still friends to this day. Some other highlights were my journalism class which changed my outlook on writing – I just loved it. It was the same with the drama class I took. Overall, all the subjects together, history and film equally, were just so eye-opening. Ways of thinking and the way of communicating what you are thinking is all fascinating to me and I never would have read certain theories and opinion pieces without studying Film and History. I wish now that I would have partied less and paid more attention to my text books. But don’t we all?

Do you have a favourite spot on campus? If so, where is it and why? It has to be Drapers. For all the memorable Monday is Calling events!

Do you have any role models that you look up to, both inside and outside of your field? J. K. Rowling was pretty much a big influence on why I always wanted to move to England. Kathlyn Kennedy is also an extremely inspiring lady in the world of film; I would love to be like her one day. Many of my female bosses and tutors from the past have also been pretty impressive. I admire them for their hard work and persistence – so this is a big shout out to all of those individuals who helped me these past 8 years since I’ve been living in London!