As part of Welcome Week 2020, we caught up with alumna and newly elected Students' Union VP Communities, Tiana Dinard-Samuel (Film Studies and Hispanic Studies BA, 2020): "In this role I get to look out for the welfare of all of our communities and liberation groups such as BAME students, LGBT+ students, women students and international students and I’m so glad we have a role now dedicated to supporting them." 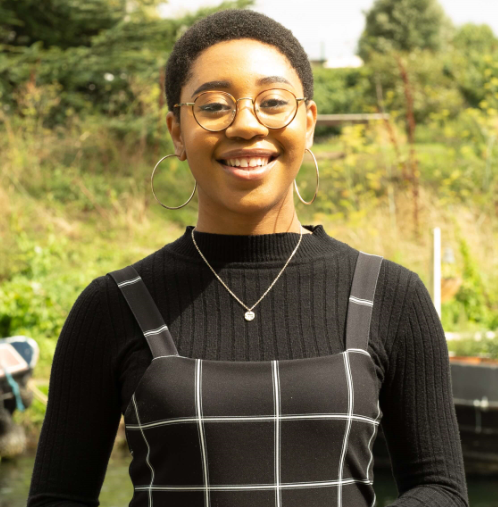 Why did you study Film Studies and Hispanic Studies at Queen Mary? What sparked your interest in this specific degree? I enjoyed studying Spanish throughout secondary school and wanted to do it at university, but I really liked the idea of a joint honours degree because I didn’t want to do it on its own. I’ve always loved film so I pretty much thought why not do that? Queen Mary has a great film department and was one of the only universities where I could study both Film and Spanish courses equally!

What aspects of your degree did you find most enjoyable? What modules did you like learning about and was there anything that surprised you in your studies? I really enjoyed the variety of films we were able to watch and study, especially the modules I took that explored various types of world cinema rather than focussing on just Hollywood. I also did a year abroad in Buenos Aires as part of my Hispanic Studies requirement and I really enjoyed my time living there and developing not only my language but myself as a person!

Why did you choose to study at Queen Mary in particular? I wanted to live in a diverse city like London because I grew up somewhere that was the opposite of diverse, and, as I said earlier, Queen Mary was one of the few places that offered the course combination that I was looking for. I was also impressed by the proximity of the Sainsbury’s to the campus!

Congratulations on your new role as Vice President Communities. What made you apply for this role within the Students’ Union? Thanks!! I’m not sure that I would have applied if I hadn’t had the experience as an intern for the Student Engagement team of the Students’ Union. This role really opened my eyes to the hard work that goes on behind the scenes of QMSU to improve student experience and inspired me to want to be a part of it. VP Communities is a new role created this year split off from the original duties of the VP Welfare and it encompasses everything I am passionate about! In this role I get to look out for the welfare of all of our communities and liberation groups such as BAME students, LGBT+ students, women students and international students and I’m so glad we have a role now dedicated to supporting them.

What do you aim to achieve in this role? What are your main aims going forward? This year, one of the things I hope to do is to tackle the lack of BAME representation in our university staff. Students at Queen Mary come from such a diverse range of backgrounds which is incredible but unfortunately this is not reflected in staff nor necessarily in the curriculum, so I also hope to decolonise the curriculum so that students are taught a more diverse range of topics and read into more scholars and ideologies and/or approaches that are not only Eurocentric. I will also lead on our liberation campaign months that celebrate and educate on the diversity on campus such as Black History Month or Islamophobia Awareness Month, working with students who self-identify in these groups.

How does it feel that you were elected by students to represent the voice(s) of students? How do you plan on ensuring that you truly represent the voice(s) of students? It’s very humbling to be elected but I also feel the pressure because I don’t want to let students down. I hope to be very accessible this year either more formally by email or of course via my social media, through which I am always willing to reply to students. I had hoped to do office hours where students could come and talk to me but of course due to Covid-19 we are not physically on campus so I’m still figuring out how to be equally available online!! Fortunately, the Students’ Union’s processes are based in democracy which makes sure students are at the heart of what we do!

What was so special about your time at Queen Mary? I think the most special part of my time at Queen Mary was the people I got to meet here! I’ve made some great friends from my time in different societies and I have been able to grow and have so much fun with them which is honestly maybe more important than my degree!

Were you involved in any extracurricular activities during your studies, e.g. sports, societies, any Ambassador roles? I mentioned before that I was a student intern for the Students’ Union in my final year, but I was also involved in a few societies before that such as Unite society where I was on the committee in my second year as Head of Drama. It was a lot of fun putting on activities and events for other students and being able to meet so many new people!

Do you have a favourite spot on campus? My favourite spot on campus would definitely be by the canal on the Mile End campus – specifically in the summer! I remember sitting on the grass in the sun “revising” for exams but really just having a nice time with some friends! It’s quite pretty by the water although the geese are intimidating to say the least…