In challenging times such as the one we are living through, being able to connect with people is vital. A historical understanding of the Holocaust reminds us of the importance of this, and what types of events could happen and what types of humans we could be if we choose division and radicalism over tolerance, and homogeneity over diversity. 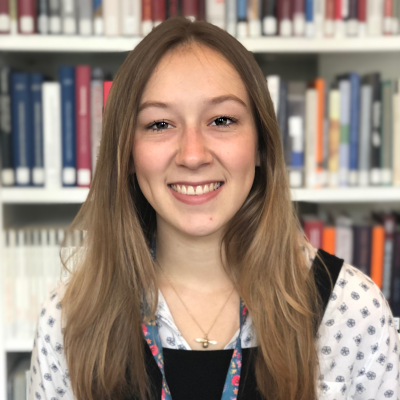 What influenced your decision to study History at Queen Mary? Did you have a particular career path in mind?

I always wanted to study in London, both because of the wealth of archives and museums and because of its incredible diversity. As one of London’s few campus universities, I was drawn to Queen Mary and after attending an open day and feeling the energy of the campus, my heart was sold!

In terms of my choice of subject, I made the decision not to study history at GCSE and deeply regretted it. After returning to the subject with some wonderful teachers at A-Level, I knew that I wanted to be a historian and I haven’t looked back since.

Although it was the most demanding year in terms of pressure and output, I by far enjoyed my final year the most. After two years of taking quite diverse modules, I was able to specialise in colonial history with modules such as ‘Africa Bound: Politics, Society and Power during the Era of the Atlantic Slave Trade’ and ‘The Age of Emancipation: Slavery and Freedom in the Atlantic World, 1763-1896’, with Professors Reuben Loffman and Erik Mathisen, respectively. Both professors gave such insightful lectures and considerate guidance - you couldn’t help but feel inspired! It was during this year that I also got the opportunity to take my first steps into independent, extensive archival research. I found the whole experience fascinating, and it later became really valuable when applying for jobs.

What did you love most about the School of History at Queen Mary?

The staff! Throughout my undergraduate degree I remember being in awe of the teaching staff; so many of the lecturers within the School of History were experts in their field, and all of them were so passionate, empathetic, and helpful.

I’ve already mentioned Erik Mathisen and Reuben Loffman, but I was also truly honoured to have the opportunity to learn from some really dynamic female academics, such as Professors Jo Cohen and Amanda Vickery.

You went on to study a masters in Holocaust Studies at Royal Holloway University. How did you decide on your topic of study for your graduate degree?

As one of the most chasmic events in human history, I have always found the Holocaust and the Second World War to be both profoundly shocking and interesting. After graduating from Queen Mary, I began working for The Wiener Holocaust Library and it was during my time as an employee for the Library that I realised that this was the topic I wanted to specialise in; not only did it interest me intellectually, but I could clearly see its powerful after-effects reverberating in society today.

In his famous study, What is History?, the scholar, E.H Carr, wrote, ‘great history is written precisely when the historian's vision of the past is illuminated by insights into the problems of the present’, and with the recent increase in right-wing nationalism, antisemitism, extremism, and refugee antipathy, it is clear to me that there remains much that we can learn from and add to the history of the Holocaust.

You currently work at The Wiener Holocaust Library as The Holocaust Explained Project Coordinator. What does your role involve?

My role as project coordinator within the research and engagement team primarily focuses on researching and writing content for The Holocaust Explained, a popular educational website that aims to explain the causes, course, and aftermath of the Holocaust to British schoolchildren.

As the oldest Holocaust archive in the world, the Library has extremely rare and extensive archival collections and The Holocaust Explained utilises these books, documents, photographs, and pamphlets to help students develop their historical understanding of the period and contextualise this knowledge.

We also support teachers by producing and disseminating educational resource packs (which include lesson plans, activities, contextual information, primary sources, and a glossary) on a variety of topics and running workshops and tours of our exhibition and archive in Russell Square.

Today (27th January) marks Holocaust Memorial Day and this year’s theme is ‘Be the light in the darkness’. What would you like people to have in mind on this day and will you be marking this day of remembrance in your workplace?

I think one of the most important reminders that Holocaust Memorial Day offers us is the value of both tolerance and diversity. With their antisemitic and racist views, the Nazis sought to both divide German society, and homogenise it. They were unwilling to see how crucial diversity is to learn and progress.

In challenging times such as the one we are living through, being able to connect with people is vital. A historical understanding of the Holocaust reminds us of the importance of this, and what types of events could happen and what types of humans we could be if we choose division and radicalism over tolerance, and homogeneity over diversity.

The Library marks Holocaust Memorial Day annually. This year, we are hosting a memorial ceremony at midday on the 22nd of January, with readings of survivor testimony from our historical collections and special guests Sir Kier Starmer MP, The Rt Hon Lord Erik Pickles, and Rabbi Jeremy Gordon. In addition to this, at 7pm on the 27th of January, we will be taking part in our friends at the Holocaust Memorial Day Trust’s annual ceremony, which is being held virtually for the first time.

What are some of the most interesting and inspiring things you have learned about the Holocaust through your work?

There are millions of powerful, difficult, and captivating stories wrapped up in the history of the Holocaust. Some of the most striking documents for me personally are those which focus on survivors and Displaced Persons in the immediate aftermath of the war. The tenacity and resilience of these humans, after experiencing such horror, and while still facing extremely challenging conditions, is deeply moving.

Similarly, the stories of resistance are equally striking. The writings of Zalman Gradowski, for example, which detail his life as a Sonderkommando in Auschwitz, are profoundly insightful, yet were written in the most difficult, catastrophic, conditions. After burying his writings (which were then discovered post-liberation), it is believed that Gradowski participated in the Sonderkommando Uprising of October 1944, where he was murdered.

In the next few years, I hope to undertake a PhD to pursue a career in academia or public engagement. I am particularly passionate about developing historical knowledge in a way that bridges the gap between scholarly advances and public understanding, thus making a tangible difference.

Looking back, how did your time and study at Queen Mary help prepare you for your career?

My time at Queen Mary was quite transformative, both in terms of my academic skillset and personal development. Academically, my degree allowed me to develop strong research and writing skills which have been particularly invaluable in my career.

Outside of my course, I was also involved in the cheerleading club, which I would heartily recommend to any prospective or current student. The club not only allowed me to develop gymnastic skills I never thought I would own (I have many left feet!) but being elected President in my final year also really helped me to gain experience and confidence in other areas, such as event planning, team management and marketing and communication. These transferable skills were particularly helpful when applying for my first jobs outside of university.

What would your advice be to students interested in studying History at Queen Mary?

Go for it! Queen Mary is such a diverse and energetic university, there are always new things to try and new people to meet. It is nerve wracking and challenging, but when you stand on the stage in the People’s Palace after completing your three years of study, you will feel truly proud of yourself and all that you have achieved.

This profile was conducted by Alumni Engagement Coordinator, Nathalie Grey. If you would like to get in touch with Roxy or engage her in your work, please contact Nathalie at n.grey@qmul.ac.uk.